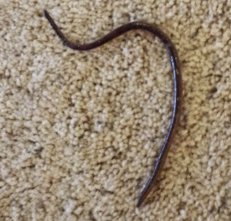 We received a long and somewhat complex email from a reader detailing a worm problem that appears to be stemming from her bathroom – from a crack at the base of her bathtub, more specifically. On multiple occasions, the reader has found worms in her bathroom and in the hallway outside the bathroom, and one has even managed to make it into the reader’s bed (her bedroom is next to the bathroom). The reader asked a few different questions, but at bottom she was wondering what kind of worms she is finding, and what she can do to get rid of the worms in her bathroom, bedroom, and hallway.

Unfortunately, the reader didn’t send us any pictures of the worms in question, and obviously this makes identification more difficult and any suggestion less certain. And while the reader did send a fairly thorough description of her situation, the details she included lead us in different directions. Since we have nothing else to work from, and to convey the relative complexity of her questions, here is her entire message (with some small grammatical edits):

“Please help. I’m pregnant with a four-year-old daughter. [Ed. Note: We presume she is pregnant and has a four-year-old daughter.] Our problem didn’t start until the sealant on the sides of our tub began to crack. All along the tub, I might add. The worst cracked spot is directly on the floor. It’s after I noticed that larger crack that I noticed a worm in our bathroom. We got rid of it. Then my daughter saw a second in the hallway directly out of the bathroom. I saw one more in there and one making its way to my bedroom next to the bathroom. Today one was on my bed!! I read through your page and noticed you mention larvae but these worms are 3-4 inches in length and thrash around when we try to pick them up. There are no legs or antennae. Three occurrences happened just this week. Our AC unit is directly behind our shower head. My question is, what worm is this and will sealing up the tub be the solution? Could they be where our AC unit is? Should we check the AC as well?”

Clearly, there is a lot going on in this message. Normally, when we receive questions about worms in bathrooms, we are inclined to think a person is dealing with something like moth fly larvae, which are a common bathroom pest. They are attracted to the decaying organic matter that accumulates in pipes, and thus they are often found in or around drains in the bathroom. However, these larvae are very small – they are generally only about a quarter of an inch in length – so clearly this isn’t what the reader is finding, and in fact she seems to want to rule out larvae from the outset. When the reader mentioned that the creatures “thrash around,” we thought of centipedes and millipedes, which might whip their segmented bodies around when disturbed, but then right after noting their frantic movements, she reports that the creatures have no legs or antennae, and this rules out these two suggestions as well. So, there is plenty of detail, but no clear picture emerges out of the data.

The reader’s message seems to imply that, overall, she might actually be finding a type of worm, and that leads us to wonder if she might be finding something as normal as an earthworm. Earthworms are generally not the type of creature one finds in a house, in large part because the relatively arid interior of a house is fatal to them, but the reader’s circumstances might make this possibility slightly more likely. In particular, if the reader’s bathroom is on the ground floor, and depending on the nature of the house’s foundation, we suppose it is possible worms are crawling in through the base of the house, coming through cracks between the bottom of the bathtub and floor. If water is seeping into the ground beneath the bathtub, giving rise to a moist and protected environment, this might be a particularly inviting place for earthworms to live.

Honestly, though, we don’t know what our reader is finding, and the earthworm scenario we have just outlined is thoroughly speculative. Without a picture to check any of our ideas against, we can’t offer our reader any ideas with confidence. And of course the issue of identification is closely related to the other questions she asked. If she found something like earthworms, then perhaps they are crawling in from the soil beneath the house, and sealing up the crack might be helpful (although if earthworms are able to crawl directly into a house, we wonder if something has gone wrong with house’s foundation). If she found something else, then perhaps the crack in the bathtub’s sealant isn’t the issue. It’s impossible to say. Finally, the reader mentioned her AC as a possible source for the worms, but we would be surprised if this is the case, largely because we aren’t really sure how the worms could “be where [the] AC unit is,” which is behind the shower head. If the idea is that the worms are somehow coming through the air conditioner, we think this is unlikely and have never heard of any such occurrence, so we are inclined to say the AC probably isn’t related to the worms.

Unfortunately, we’ll have to leave the matter at that, and hope that something we have said will at least be of some small help to our reader. If our reader has any additional information she wants to submit (like a picture), or if she wants to ask a follow-up question, she should feel free.

Article Name
Worms Under the Bathtub
Description
We received a long and somewhat complex email from a reader detailing a worm problem that appears to be stemming from her bathroom.
Author
All About Worms

1 thought on “Worms Under the Bathtub”