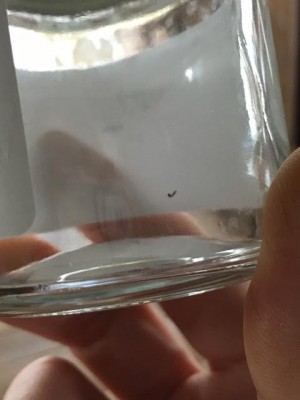 Larvae That Drop From the Ceiling Fan

A while ago, a reader wrote to us and told us in great detail about some larvae he found on his bed. He originally found the tiny creatures when he was changing the sheets. About an hour after stripping the bed, he came back into the room to find 40-50 of these tiny specimens on the lower end of the bed, near the mattress protector. He looked around for more larvae but didn’t find any, so he put the fitted sheet on the bed. When he returned 30 minutes later, there were another 10 of these worm-like organisms on the same spot, right under a ceiling fan: 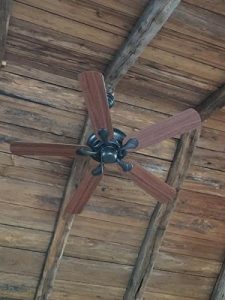 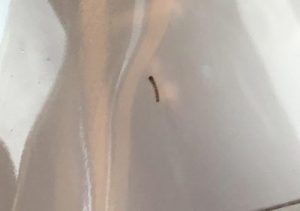 He explained that these larvae scrunch up and down rather slowly, and don’t seem in a hurry to get anywhere. Also, they are so tiny that a photograph doesn’t truly show what they look like. He believes they have a dark head with a more translucent body. To “catch” these creatures, he laid a tablecloth over the bedspread. The first morning he found about 100 larvae on the tablecloth. He washed it and dried it on high to kill them.

He has a few questions for us: Do we have any ideas about what they are? How long will this infestation last? Should we call pest-control even if the larvae seem harmless? Do we think they pose a health risk?

So, we will start with his first question: What are these larvae? We are skeptical about dismissing carpet beetle larvae. Even though carpet beetle are typically 4-5 mm long, they can be smaller or larger depending on species. They could be living inside of the mattress, which is why he didn’t find any when he looked around. Also, the creature in the photo looks a lot like a carpet beetle larvae. However, if he is certain they are coming from the ceiling fan, then they could be something else. Based on the way he described their movement (scrunching up and down), they could be inchworms, which are geometer moth larvae. But inchworms are way bigger than the described specimens. If not carpet beetle larvae, they might be another species of fly or moth larvae.

We can’t say with certainty how long this infestation will last. Since we heard from this reader about a month and a half ago, we hope it has cleared up by now. If not, we encourage him to call pest control. We don’t think these larvae pose a health risk, but we can’t be sure without knowing the identification.

To wrap up, a reader found larvae on a spot on his bed that is directly under the ceiling fan. He thinks the larvae are falling from the fan. We think this could be true, or they might be carpet beetle larvae coming from his mattress.

Summary
Article Name
Larvae That Drop From the Ceiling Fan
Description
A reader found larvae on a spot on his bed that is directly under the ceiling fan. He thinks the larvae are falling from the fan. We think this could be true, or they might be carpet beetle larvae coming from his mattress.
Author
Dori Franklin
Comments: 2 Posted by: Worm Researcher Dori Categories: Carpet Beetle Larvae, Worms Found in the House