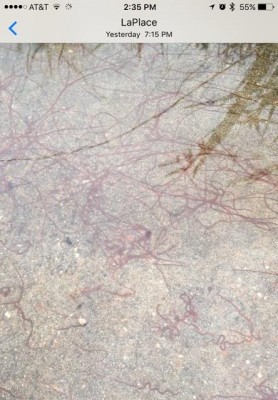 Worms That Appear After Rain Are Probably Earthworms

Recently a reader wrote to us from southern Louisiana. She explained that after some rain a shockingly large quantity of worms appeared between her house and her neighbor’s house. She has never encountered a situation quite like this before and is quite curious about it. She also mentioned that she has two dogs and wants to know if these worms could be parasitic. Here is the first photo she sent us: 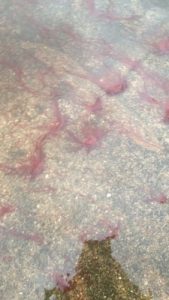 Our reader wasn’t exaggerating, there truly are a shocking number of worms present in this photo! This isn’t the first time large quantities of worms have covered our readers’ driveways and sidewalks after rain storms. In fact, we have seen even pictures of similar long, red worms covering rain-soaked lawns. So, what are they? 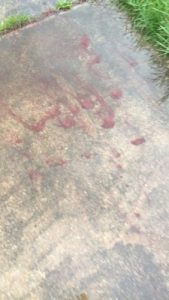 These worms resemble two worms that we write about fairly often: bloodworms and earthworms. Both of these could be a possible answer to the question of what our reader found.

Bloodworms, a.k.a. midge fly larvae, are long, red organisms that get their name from their bright red coloring. Bloodworms need a moist environment to survive. In another article, we discussed how a reader found hundreds of bloodworms on the patio after finding a leak in the ceiling. While bloodworms aren’t directly dangerous, they can potentially carry and transmit diseases, but this is quite unlikely.

Earthworms are also long, red (or brown, grey, or pink) worms that need moisture to survive. We have written several articles about earthworms popping up on lawns and driveways after storms. Although the worms in the photo do resemble bloodworms, we think it is more likely that what our reader has found are earthworms! These worm are not parasitic or dangerous to dogs.

To wrap up, one of our readers discovered hundreds (or maybe even thousands!) of long, red worms outside of her home after experiencing some rain. We think these are earthworms. If our reader is interested in learning more about why earthworms appear after heavy rains, so can check out this article we wrote last fall! 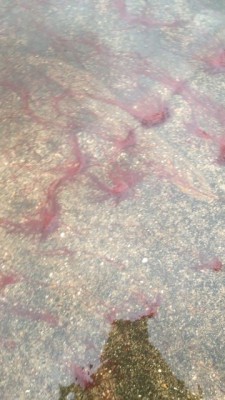 Article Name
Worms That Appear After Rain Are Probably Earthworms
Description
one of our readers discovered hundreds (or maybe even thousands!) of long, red worms outside of her home after experiencing some rain. We think these are earthworms.
Author
Dori Franklin
Comments: 0 Posted by: Worm Researcher Dori Categories: Earthworms