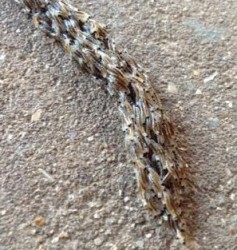 Worms or Larvae Under Breadbox in Kitchen

A reader wrote to us recently to ask about some worms that are under the breadbox in her kitchen. The worms, or potentially larvae, are “striped pale green and black,” and when they were discovered under the breadbox, they were in a circle formation. The reader was quite alarmed by the worms and was seeking our input into the matter.

The reader’s email contained a lot of details, and she didn’t really ask one pointed question, so we’ve decided to quote her entire message so that the different parts can be addressed. (Some minor formatting adjustments have been made, but otherwise the text is as the reader wrote it.)

“While cleaning my kitchen, I removed my breadbox (which I thought was flush to the countertop, preventing anything from entering underneath). I almost had a heart attack when I discovered a circular formation of what appears to be worms. They didn’t appear to be living, but seem to be joined at one place. They look like they are striped pale green and black. The only remote idea I have for their origin–After Christmas, I mixed up a large pitcher of Sangria which had a base of fresh fruit–apples, oranges, lemons and grapes. While I was stirring it, the large glass container, brand new, broke, and liquid went everywhere. I cleaned up everything except, thinking nothing could get under the breadbox, didn’t pick it up. Now I’m thinking there could have been a tiny worm or worms in that fruit. I was so grossed out by this, I don’t even want to eat anything. Any ideas?”

There is a lot going on in this message – we are told a few things about the worms or larvae that were found, and we are also given potential explanations for how these creatures ended up in our reader’s kitchen. These various pieces of information pull us in different directions. Most of our suggestions involve larvae, though, so we’ll use this word from here on out.

First, we aren’t really sure how to make sense of the “circular formation” of the larvae. Does this formation refer to the entire group larvae, as if something like fungus gnat larvae grouped together into a doughnut shape, or are the creatures individually coiling, like millipedes curling into a circle. We suppose both of these suggestions – gnat fly larvae and millipedes – are possibilities, but other components of our reader’s email suggest different possibilities. For instance, the fact that our reader found the larvae under a breadbox in particular implies that they might be one of the various types of larvae that feed on grains, like mealworms or waxworms, both of which are types of larvae that are found in kitchens. However, the problem with this possibility is that the larvae are evidently quite colorful, which suggests she might have found some kind of caterpillar. (So-called “parsley worms,” the larval form of black swallowtail butterflies, are green and black, for instance.) However, caterpillars aren’t generally known as household pests, and we don’t know what kind of caterpillar our reader might have found under her breadbox. So, on the matter of identification, we simply don’t know what she found, and without a picture, we don’t want to offer any specific suggestions apart from what we have mentioned above.

This brings us to the matter of how the larvae got under the breadbox, and on this matter we too are unable to offer any definitive answers. Because there are a number of household pests that feed on grains and similar such food items, it isn’t particularly surprisingly to find larvae under a breadbox, even if the box appears flush with counter. A tiny larvae can get into a lot of tight spaces, and no matter what our reader found, something evidently did make its way under our reader’s breadbox. The spilled sangria could also explain the presence of the larvae, although this fact alone doesn’t suggest any particular creature to us. One thing that doesn’t seem especially likely is that the larvae were actually in the sangria itself. It seems that any sort of larvae that might have been in the fruit would have been discovered during the making, or the cleaning up, of the sangria. There wouldn’t have been a group of larvae that made their way under the breadbox and stayed there, while all the others were cleaned up without notice, or so it seems to us.

Unfortunately, that is all we can say about our reader’s question, and we wish we were able to provide more definite answers. However, there is a lot we don’t fully understand about our reader’s situation, and we also don’t have any images to work from. In any case, we don’t necessarily think our reader should be alarmed by what she found. We’re sure the larvae were an unwelcome surprise, but she has cleaned everything up, and often that is all that is needed to get rid of an isolated pest problem. She should continue to routinely clean under the breadbox so that no food source can accumulate, and given her recent shock, we don’t doubt she will.

Article Name
Worms or Larvae Under Breadbox in Kitchen
Description
A reader wrote to us recently to ask about some worms that are under the breadbox in her kitchen.
Author
All About Worms
Comments: 0 Posted by: Worm Researcher Evan Categories: Pest Worms