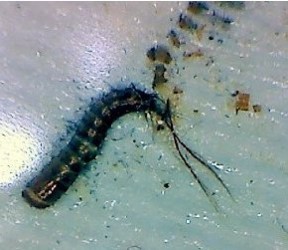 We received a question from a reader a little while back about a worm she found in her sheets while using a lint roller. (To address the terminology issue up front, we should note that she probably found a larva in her sheets, not a worm, so we’ll use “larva” from here on out.) The reader shares her room with a cat, and although she doesn’t let the cat on her sheets for shedding-related reasons, she thinks the cat might be responsible for the larva’s presence in her room. If not, she suggests that it might be coming from her (the reader). In addition to the origin question, she also wants to know what the larva is, so we’ll address both of these matters below.

Here is the picture the reader submitted along with her question:

We’ll begin by saying that we don’t think this could have come “from” the cat or our reader, although it isn’t entirely clear how we are to understand that preposition. We suppose it is possible that the larva hitched a ride onto the bed on either the reader or her cat, and thus could be “from” one of them in this sense of the word, but that is really the only sense. The types of worms that afflict cats are for the most part internal parasites, not creatures one finds lying around one’s house. Cats can also have fleas, giving rise to flea larvae, but flea larvae don’t look like the creature pictured above. As for humans, we simply aren’t sure how a larva could be from the reader except in the way described above (the hitched-a-ride theory), so we’ll leave the issue at that.

We are reasonably confident in this first part of our answer, but we are struggling to come up with an identification. Our first thought was that our reader might have found carpet beetle larvae, an answer we give in response to about 5-10 percent of the questions we answer. The elongated body is similar in shape to a black carpet beetle larvae (Attagenus unicolor), and we thought the long extensions on the end of its body were the hairs that are found on the anterior ends of these larvae. However, when we took a closer look, it looks like these extensions could actually be on the front end of the creature, and thus they might be antennae. In which case, our reader might have actually found an adult insect and not a larva at all. However, adult insects have six legs that are generally visible, which this creature doesn’t have, and it is in the larval stage when the legs are harder (or impossible) to see, which is why we still think this creature is a larva. One final thought is that our reader might have found an earwig, one that is perhaps still in the larval stage, but we don’t assign a high probability to this suggestion. It simply has the approximate body dimensions of some earwigs, which also often have long antennae.

Unfortunately, we can’t give our reader a definite identification, but she can at least take some comfort in the fact that the creature likely didn’t coming “from” her or her cat, at least if we understand this fairly literally.

Article Name
Worms or Larvae in Your Sheets: Is Your Cat Responsible?
Description
We received a question from a reader a little while back about a worm she found in her sheets while using a lint roller.
Author
All About Worms
Share the knowledge

1 thought on “Worms or Larvae in Your Sheets: Is Your Cat Responsible?”