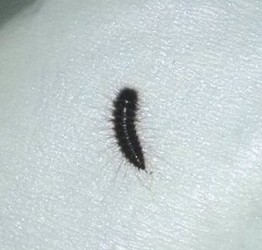 Via the All About Worms Facebook page, we received a message from a reader who found about 15 to 20 “worms” in her cat’s food dish. These “worms” are almost certainly insect larvae, so we’ll go ahead and refer to the larvae in the cat food from here on out. In addition to the cat food dish, the larvae were found in the bag of cat food, and in fact this is probably their point of origin, as various types of larvae will infest bags of pet food. The reader also indicated that one of her cats threw up the other night, but it isn’t clear if this is connected to the pet food larvae. No specific questions were asked, but the reader indicated “any info will be tremendously helpful,” so we’ll offer what we can and hope that it helps.

First, here is a picture of the creature our reader found:

We started addressing our reader’s situation without knowing that she sent us this picture (Facebook doesn’t display the image unless the reader’s message is clicked on), so at first we wrote in more general terms about the matter of identification. We noted for the second time that, given the circumstances, it seems overwhelming likely she found some sort of insect larva. We also indicated that an especially common creature to find in a bag of pet food is the larval form of an Indian mealmoth, which are often called “pantry moths” or “flour moths.” (More precisely, they are in dry pet foods, like standard bags of cat and dog food, as well as bird seed and flaked fish food.) In fact, the reader did not find Indian mealmoth larvae because they don’t resemble the black creature above, but we figured we’d keep this information in for other people who find this article. Instead, we suspect our reader found a type of beetle larvae, probably of the family Dermestidae. The picture above looks like a larder beetle larva, which could be found in a bag of dry cat food, so we’ll offer this as our “official” identification, although it could be another closely related beetle species.

Why one of our reader’s cats threw up is unclear, and it could have nothing to do with the larva in the food. The reader noted that her cats have been acting normal, and the vomit incident happened a few nights before the larvae were discovered. Also, even if a cat ate a larva, this wouldn’t necessarily cause any harm – it could simply be an extra boost of protein. However, larva can carry pathogens, so you wouldn’t want to feed your cats food that has larvae in it, and in any case we aren’t qualified to commit on the health of our reader’s cats. If our reader is concerned about her cat’s health, she should visit a veterinarian, and that’s about all we can say on the topic.

So, we don’t think our reader needs to be overly concerned about her cats’ health simply because she found larvae in their food, but she should visit a vet if any of them appear to be in poor health. Also, the bag of cat food should be discarded, and this would be the case even if the larvae couldn’t possibly harm the cats. Larvae infestations can spread quickly, so you want to eliminate their source as soon as possible. It sounds like the larvae are coming from the cat food, so it should be gotten rid of.

Article Name
Worms or Larvae in Cat Food Dish
Description
These "worms" are almost certainly insect larvae, so we'll go ahead and refer to the larvae in the cat food from here on out.
Author
All About Worms
Comments: 0 Posted by: Worm Researcher Evan Categories: Cat Worms, Pest Worms