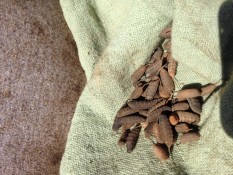 We received an interesting and fairly perplexing question from a reader yesterday about “a bunch of small white worms or larva.” (It should be “larvae,” with that bizarre Latinate ending to indicate plurality, for the record.) The worms or larvae were found in a pond that is used by cattle at a dairy. The creatures in the pond are about an inch long and they have a tail that is about as long as the body. The reader sent a nice (if confusing) picture of the worms or larvae, which we have included below. What are these worms or larvae in the pond?

We said the reader’s question was perplexing, and that primarily has to do with the picture he sent:

While this is a clear, focused picture, we aren’t exactly sure how to square it with the other information we were sent by the reader. The reader said he found inch-long white worms or larvae in his pond, so initially we thought he might have found something like crane fly larvae, but obviously the image doesn’t depict white worms or larvae in a pond. Rather, it appears to show some creatures that are encased in a brown shell which clearly are not in a pond. What are we to make of this?

One immediate thought we had is that the picture is not of the worm or larvae itself, but of its cocoon. And if it is a cocoon, the reader is finding some sort of caterpillar, the larval form of moths and butterflies. Through a fascinating process, caterpillars turn into butterflies or moths while they are in the cocoon. (Or chrysalis – there is a subtle different between the two. Basically, a moth uses a cocoon and a butterfly a chrysalis.) Whatever are pictured above at least look like cocoons, and the “tails” could just be part of them, meaning they aren’t part of the creature itself. (Some cocoons have small appendages that are attached to trees, allowing the cocoon to hang on the tree.) So, one possibility is that our reader is finding some sort of white caterpillar, and for whatever reason he sent us photos of the caterpillars when they had already entered their cocoons.

There are a couple of problems with this suggestion, however, even though it is essentially the only possibility we can come up with. First, we aren’t certain that we are looking at cocoons. Obviously, we don’t know what every cocoon in the world looks like (there are nearly 175,000 species of moths and caterpillars in the world), but the ones we are familiar with don’t have ridges along the entire outside shell, which appears to be the case with whatever are pictured above. Rather, they have ridges only on about one half of the cocoon, and the rest is more or less smooth. Second, and probably more importantly, only a very small percentage (about .5 percent) of caterpillars are aquatic, so one doesn’t come across them very often. (For the record, there are a few caterpillar species that are amphibious, but they are found only in certain types of streams in one part of Hawaii.) So, given that our reader is finding the creature in question in a pond, we aren’t sure how likely it is that he is finding caterpillars. However, if he is finding some other type of worm or larvae that is more commonly found in a pond (we mentioned crane fly larvae above because they more or less match the reader’s written description of what he found), then what explains the picture he sent? Again, the image just doesn’t depict white worms or larvae in a pond.

Because of the dilemma just outlined, we must confess that we don’t know what the worms or larvae in our reader’s pond are. Based on his written description, we would offer one possibility; based on the picture, we would offer another. There is a pretty glaring incongruity between the two. So, alas, we conclude inconclusively.

Article Name
Worms or Larvae in a Pond
Description
What are the small white worms or larvae our reader is finding in his pond?
Author
All About Worms
Share the knowledge