Fortunately, the reader sent us a picture with his question, so we at least have a reasonably good idea what the creature looks like. Understandably, the reader didn’t want to get too close to the creature he was photographing (you never know what you are getting close to), so our guess is that he took this photo from a bit of a distance, which is perhaps why it is a little bit blurry. It’s still a cool picture, though, and it does show that the creature looks a bit like a snake. Here it is: 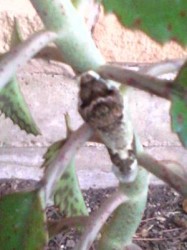 As you can see, it is a little hard to decipher exactly what this creature looks like. It looks kind of grey or brown, but that may just be the picture. We’re also not sure in what part of the world this picture was taken. This limited information, coupled with the fact that this creature could be any number of thousands of different species, makes identifying our reader’s find extremely difficult. However, we can at least narrow down the options and say a few general remarks about the creature pictured above.

First, we are fairly sure that our reader found a caterpillar and not a worm. Although “worm” refers to an obsolete taxon, generally the term denotes creatures like night crawlers who live underground or in aquatic environments. By extension, worms are not found crawling around on plants. What are found crawling around on plants are caterpillars (i.e., the larval form of moths and butterflies). This fact, taken together with the intricately patterned body of the creature pictured above, suggests that the reader found some sort of caterpillar. Of this much we are fairly sure.

Unfortunately, this doesn’t get us very far because there are tens of thousands of different caterpillar species. Normally, we could use an identification guide to come up with a few possibilities for what this creature might be, but in order to use guides of this sort, you really need to know things like the color of the caterpillar and the geographical location in which it was found. Based on the what we do know, the only possible guess we can make is that the creature above is something we happened to have written about recently, the Elephant-Hawk moth caterpillar. These caterpillars are found in many parts of the world – basically everywhere besides the Americas and Africa (although even introduced caterpillars have been found in Canada). One of the defining characteristics of Elephant-Hawk moth caterpillars is that they look like snakes. This is an evolved defense mechanism that protects the caterpillars from birds. A caterpillar’s appearance is one of its primary ways of defending itself.

We can’t be exactly sure what kind of caterpillar that looks like a snake our reader found. The Elephant-Hawk moth caterpillar is merely one of many possibilities. As always, if any readers have suggestions, please leave a comment below.

2 thoughts on “Worms (or Caterpillars) that Look Like Snakes”