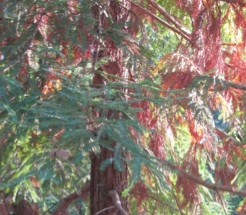 A reader recently sent us a very short question about worms on trees. More specifically, he asked what type of worm will “eat a circle” around a limb until it falls to the ground. (We presume – and desperately hope – that “limb” here refers to a tree branch or some other plant limb, not the limb of a sentient animal.) The reader actually didn’t limit his question to worms – he mentioned it could be a “bug” too. (In terms of scientific imprecision, the word “bug” is even worse than the word “worm,” alas.) So, we are tasked with determining what kind of creature – be it a worm or a bug – is capable of eating a branch or limb off of a tree.

This question holds the rare honor of being both incredibly general and incredibly specific all at once. It is general because we are given absolutely no description of the creature our reader is interested in – we have no idea how big it is, what color it is, what kind of body it has, and so on. There are also many millions of different species of bugs and worms, so we are swimming in an enormous sea of possibilities. However, the question is specific in that there probably aren’t too many worms or bugs that are capable of sawing through a branch. In fact, we aren’t even sure if there are such creatures. The reader’s one-sentence question gives no indication that he himself witnessed this, and he didn’t mention any source for his curiosity. However, we have to assume he has some good reason for asking us what he did, and that he is not merely asking us (whether he means to or not) some sort of trick question.

Although we have received reader questions about worms and trees many times, we have never heard of a worm (or any other bug) taking a tree down limb by limb. Generally, worms that infest trees (which, by the way, are not worms, but rather various types of insect larvae) work more subtly – they tend to eat the leaves of a tree, or cause the tree to defoliate some other way. With many (but obviously not all) larvae, an infestation is not particularly bad: leaves will fall off the tree, and the larvae themselves can be a bit unsightly, but they won’t actually kill the tree. A creature that can take off branches sounds like a more aggressive pest.

What kind of aggressive pest, however, we simply do not know. (We also don’t know why a worm/bug would even want, if you’ll pardon the anthropomorphism, to take off a tree branch. What need are they fulfilling?) The one possibility that came to mind are termites, but there are a couple of problems with this suggestion. First, almost all termites feed on dead wood (and other dead organic matter), which means that the vast majority of termites would not go after a living tree (not that our reader specified that the tree must be living, considering he didn’t even indicate that he is talking about a tree at all). There is, however, at least one species of termite that goes after living trees – the Formosan subterranean termite – but they eat through the tree fairly indiscriminately, more or less hollowing it out. They do not simple eat circles around a branch until the branch falls to the ground.

It seems like our reader is asking us about some specific species of bug or worm that he once heard about, but now no longer recalls, and unfortunately we aren’t able to help him with this. If any of our readers have heard of worms or bugs that can eat a branch to the ground, we invite you to comment below. Maybe we can help our reader after all.

[Note: Thanks to reader D Gring, we have now identified this creature! Read about the Twig Girdler here!]

4 thoughts on “Worm or Insect that Eats Through Tree Branches”