A reader wrote to us the other day about a unique worm that she found on the beach in Port Aransas, Texas. The worm (or rather, worms – she found several) are covered in what appear to be dozens of small shells. The reader attributed agency to the worm, suggesting that the worm had perhaps “decorated” itself with the shells, much like a decorator crab wraps itself in seaweed to blend in with its surroundings. Many of these strange worms, which were a few inches long on average, were found on the beach, although a few others were found in the water, where they were partially buried in sand. (Presumably, these worms were right by the shore, or else our reader must have been diving to the explore the ocean’s floor.) What are these worms?

First, let’s take a look at the picture the reader submitted along with her question: 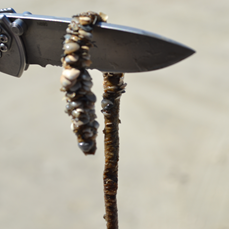 Even though this reader gave us all the information she possibly could, including where the worms were found and their physical appearance, not to mention the picture above, we regrettably don’t have a definite response for her, in spite of our best efforts to locate an answer. Such is the nature of worm identification.

The only specific worm we were able to find that even partially resembles what the reader describes is called the eighteen-scaled worm (scientific name: Halosydna brevisetosa). Given the reader’s description of the worm as covered in shells, the eighteen-scaled worm has a promising name (scales on a worm might look like shells), and some (but certainly not all) pictures of this worm are somewhat similar to the reader’s description, but, frankly, we’re not very confident in this guess. However, these worms are commonly found in north Mexico, part of which is near the Texas coast line, and they also live in Marine environments, so there are a couple of parallels between the two. The eighteen-scaled worm and the mystery worm on the beach are also about the same size, but the similarities stop here.

While we didn’t find any other specific worms to mention, we should point out that tons of different worms live in or near the ocean (for some examples, see our article about marine worms). In fact, this is quite a natural place for worms to reside, as worms need to live in moist environments to survive. We bring up this rather obvious point only to say that the reader may have found common aquatic worms (something like, say, bristle worms, millions of which come to the surface of shallow waters in places like Florida once a year to mate) that were for some reason covered with what appeared to be shells (or if they weren’t shells, perhaps they were some sort of barnacle-like creatures that latched onto the worms?). In other words, the reader may not have found some exotic shell-covered worms, but just normal worms that were uniquely decorated, as it were.

So, our reader likely either came across eighteen-scaled worms, despite the limitations of this hypothesis, or else she found some other marine worms that managed to cover themselves (or be covered) by some shell-like adornments.

4 thoughts on “Worms on the Beach”

This many people searched for this info: 4,665