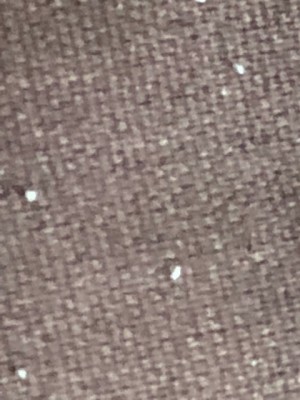 We recently received a short message and a few photographs from one of our readers. She explained that about a week ago she noticed some worm-like organisms on the window and inside the blinds of an old trailer she just bought. She vacuumed them up, but then a week later they returned: 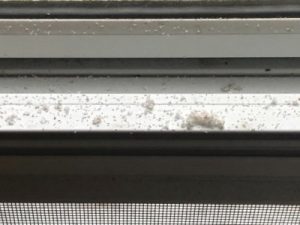 The specimens are so tiny that clumped together they look almost like small piles of rice. Now, this isn’t the first time that we have heard from a reader about hundreds of tiny worms on their window sills, walls, or ceilings. We believe our reader is dealing with the same thing that they were: moth larvae. 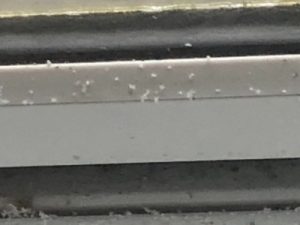 These little caterpillars probably just hatched! It’s possible that when our reader vacuumed the window sill, there were some eggs left behind. Or perhaps an adult moth came and laid more during the week. The egg stage for moths typically lasts for 4-10 days, so either scenario could be possible.

In order to get rid of these larvae and to keep them from coming back, our reader will need to clean off her window and windowsill. Rather than using the vacuum again, she should use a cleaning agent and a washcloth to wipe down all the surfaces. There is probably some organic matter on the window sill that is attracting moths and serving as a food source for the larvae. Once the organic matter is gone, the larvae should no longer be a problem!

In conclusion, today we responded to a reader who found tons of tiny white worm-like organisms in her trailer on two occasions in one week. We are confident these specimens are actually moth larvae! By cleaning the surface on which they were found she can say goodbye to them.

Article Name
Worms On Old Trailer Window Probably Moth Larvae
Description
Today we responded to a reader who found tons of tiny white worm-like organisms in her trailer on two occasions in one week. We are confident these specimens are actually moth larvae!
Author
Dori Franklin
Share the knowledge

This many people searched for this info: 3,210