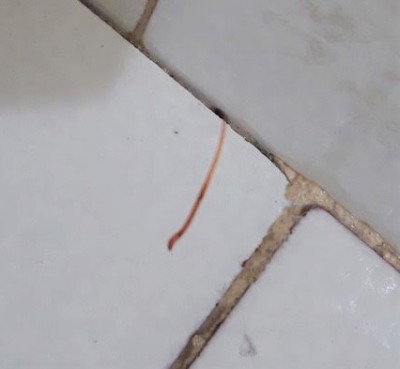 Recently, a concerned man reached out to us after finding a dozen worms in his bathroom. He believes they are living under and in between the bathroom floor tiles and hopes that we can identify the worms. 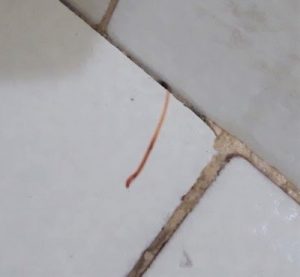 The worms in question appear to be somewhat long, thin, and slimy. Their coloration ranges from a maroon/brown, to tan from one end to the other. In the picture above, one can just make out a middle section of the worm which appears thicker in girth, and darker in color. Because of this, as well as its coloration, shape and size, we would propose that this is an earthworm. For a moment, we thought the worms might have been bloodworms, but for reasons that will be outlined later, we concluded that this was most likely not the case.

Earthworms are the bread-and-butter of worms, that is to say, the most common worm one can find. Usually, one finds them outside, rather than inside, but the latter is not unheard of. These common critters have been known to crawl up through pipes; this happens if they find an opening in a pipe underground, or that they crawl in through the sewers. In this case, it could be that there is not much between the bathroom tiles and the earth underneath, and these earthworms found openings big enough to wedge their way into our reader’s bathroom. As we were not given much context in terms of the location or type of building our reader is located in, there is not much we can go off of in terms of guessing at how the earthworms managed to get underneath the bathroom tiles.

Furthermore, our reader asked if these worms were parasites. Earthworms are not parasites, but are decomposers, and are extremely beneficial to the environment as they are a vital part of soil processing and fertilization. These blind critters utilize a powerfully muscled jaw to chomp on decaying organic matter and pass out unused soil litter and other matter in the form of faeces, which are rich in nutrients, and very good for soil. Many who wish to farm crops purposefully place earthworms on their property to help with fertilization. Our guess is that these worms were attracted to the organic matter inside our reader’s bathroom, and thus crawled up through the floor to ‘see’ what they could find there. This comes as a result of an unkempt bathroom. Regular cleaning should lessen the amount of earthworms, and other critters for that matter, that are attracted to the bathroom. Additionally, a worm’s entire body is pretty much composed of muscle, which is what earthworms contract and expand in order to move across the ground, and also they do have tiny bristles on each segment that help them move, they do not have legs. This makes them very durable, and is what makes them able to squeeze in and out of so many places. They simply have no bones to break. 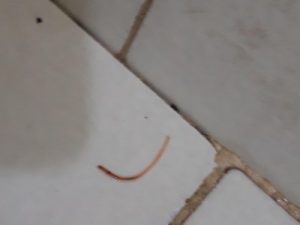 However, our reader may be wondering if these worms would be parasites if they were, in fact, actually bloodworms? The answer is no. Even if these were bloodworms, they would not be parasites either, as parasites, like earthworms, feed on decaying organic matter in water, but not on living organic matter. Regardless, we do not think these are bloodworms. According to Fishkeeping World, there are two prevalent types of bloodworms that people find. The first is those that are midge fly larvae (Chironomidae), which are short, bloodred in color, and often used for fishing, and the second of which are those of the genus Glycera, which more resemble earthworms in coloration, and are longer and thicker. Still, we do not believe that the worms our reader has found are the latter of the two types of bloodworm. Glycera bloodworms are bristleworms, meaning they are marine worms, and tend to stay at the sediment level of aquatic habitats. While it is possible that one might crawl up through the pipes in a toilet, it is unlikely that they would live under the tiles of a bathroom. Plus, not only would the bristles be visible, while this worm appears smooth, but this species of bloodworm is much larger than the worm in the picture. In fact, they can grow up to 14-inches long!

So far as what we can recommend to stop the earthworms from entering our reader’s bathroom, the only option other than regular cleaning is unfortunately one that is expensive and time-consuming; as far as we can tell, his options are either somehow sealing/filling in the cracks between the tiles with spackling paste or some other material, or putting in a whole new floor. Consulting a tile installer might be an idea worth considering. The problem is that there is clearly enough room between the tiles for worms to crawl up through, and this means other insects and worms could also potentially enter his bathroom the same way. Not only do we not recommend the use of pesticides, nor killing whatsoever (unless absolutely necessary), but according to Anne Raver at The New York Times, the Department of Agriculture considers earthworms beneficial creatures, so killing them would be “technically illegal.”

To conclude, the worms our reader found living under his bathroom tiles are earthworms. These worms are harmless and not parasitic, but we can understand that finding dozens of them in one’s bathroom is not an ideal living situation. To stop these worms from continuing to show up, we encourage our reader to consult a tile installer to see what their options are.

Article Name
Worms Living Underneath Bathroom Tiles are Earthworms
Description
Recently, a concerned man reached out to us after finding a dozen worms in his bathroom. He believes they are living under and in between the bathroom floor tiles and hopes that we can identify the worms.
Author
Worm Researcher Anton
Share the knowledge

1 thought on “Worms Living Underneath Bathroom Tiles are Earthworms”

This many people searched for this info: 5,715