A reader recently wrote to us about two small worms she found in her bed. (The reader called them “worms,” even though they might be some other creature, like larvae.) She was understandably a little concerned and disgusted, as people who find worms in their bed tend to be. The reader was most concerned about the possibility that these worms (or larvae or some other creature) came out of her body during the night, and she didn’t directly ask what kind of worms she found in her bed. However, the two matters are of course related, for if we identify the worm, we might be able to tell if it came out of her body. (We don’t think so.)

The reader sent three pictures of the worms, but unfortunately they aren’t particularly clear, and the reader didn’t send any additional description of the worms she found. For obvious reasons, this make identifying the worm somewhat hard. Here is the clearest picture of the bunch: 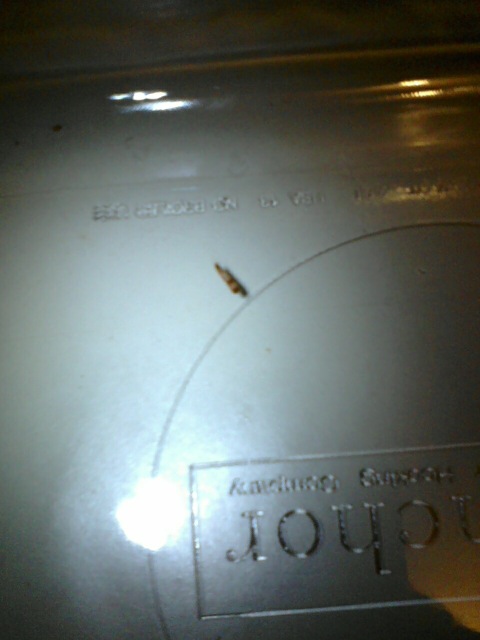 We can tell that it’s small (unless this is an absolutely enormous jar), and also that it is a brownish color with dark stripes. And we also know that it was found in a bed. What could this be?

First, we don’t think that the reader is dealing with a worm, although as we have pointed out countless times this is kind of hard to say with any authority because the word “worm” isn’t a precise term in the world of science (because it refers to an obsolete taxon). A worm, however, generally refers to creatures like earthworms that you find in the soil (a lot of people also use the term to refer to certain cylindrically shaped creatures found in aquatic environments), and the picture above doesn’t appear to depict a “worm” in this sense of the word. Rather, it looks to us to be the larval form of some sort of insect, which people are constantly finding in their homes. Larvae, for the record, are the form that many insects take before maturing into adults. The larval stage follows the egg stage of the life cycle. Perhaps the most well-known type of larvae are caterpillars, which eventually mature into butterflies or moths.

That said, what kind of larvae did our reader find? Without more information, it is hard to say, but one possibility is carpet beetle larvae. We write about carpet beetle larvae all the time because people seem to find them a lot in their homes. (This is another reason why we think our reader might have found this type of larvae – they’re common.) They are shaped kind of like a carrot and are often of a brownish hue (although they can also be a yellowish color). Sometimes they have stripes. There are different kinds of carpet beetles, and if our reader did in fact find the larvae of this beetle, then she probably found the larvae of the varied carpet beetle, as this is the type that is often found in fabrics, especially carpets, but it wouldn’t be crazy to find one in a bed.

This is our best guess, although we are definitely not certain. If our reader did find carpet beetle larvae, they definitely didn’t come out of her body. The only common worm we can think of that might be said to “come out” of one’s body is the pinworm, and the creature above does not look like a pinworm at all, and you wouldn’t just find them lying on your bed in any case. That is all we can say about our reader’s question, though.

1 thought on “Worms in the Bed”

This many people searched for this info: 4,323