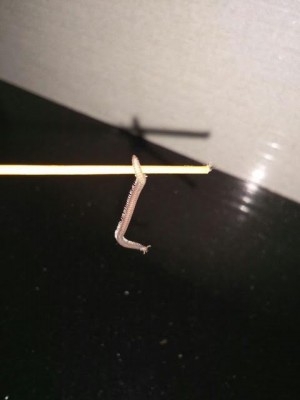 “Worms” In India are Millipedes

July 12, 2017
A few days ago we heard from a reader in India. He discovered some worm-like organisms that seems like millipedes. The creatures live indoors, and seem to prefer dry nooks like the corners of ceilings and walls. He said these worm-like organisms are more active at night than during the day. These critters must be crawling in our reader’s bed because he explained that they often die by crushing under his body at night, giving him a skin rash. Once the creature is dead, it becomes dry and breaks into pieces. Here are the photos he sent us: 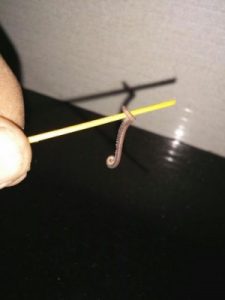 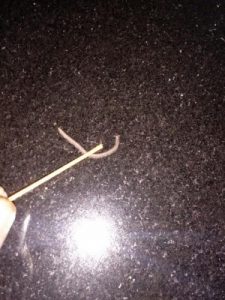 We believe that our reader was onto something, these are millipedes! We recognize the creatures by their segmented bodies, legs, and tiny antennae! Millipedes are technically arthropods, not worms. They have two pairs of jointed legs per body segment. There are about 12,000 known species of millipedes around the world. Millipedes are detritivores, meaning they eat decaying leaves and plant matter. They usually reside on forest floors, where they live amongst leaf litter and dead wood, and generally have a preference for humid conditions.
Our reader mentioned the millipedes are giving him a rash upon contact. According to the University of Georgia, millipedes are not poisonous, but some species have glands that can cause allergic reactions in humans. While the rash is certainly less than ideal, we think the main issue to address is how these arthropods are getting into his home. The inside of a house is not an environment that millipedes can thrive in. These creatures are probably wandering in through an open window or door by accident, and then hiding out in the corners. Our reader should check that all of his windows and doors are properly sealed and screened when left ajar. In addition, he can check any vents for openings that the millipedes are sneaking in through.
To end, a reader reached out to us about some creatures he discovered in his home in India. We agree that he is dealing with millipedes.

Article Name
"Worms" In India are Millipedes
Description
A reader reached out to us about some creatures he discovered in his home in India. We agree that he is dealing with millipedes.
Author
Dori Franklin
Comments: 0 Posted by: Worm Researcher Dori Categories: Centipedes and Millipedes