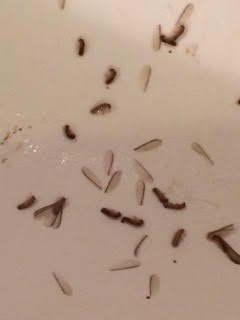 Worms in House are “Something Out of a Horror Movie”

We just heard from a reader who has been finding little brown worms around her house, even dropping from the ceiling. Now it appears that they have matured into something with wings. She has been dealing with this issue for several months. Originally she believed they were Indian meal moth larvae, so she went through the process of cleaning out everything to get rid of them. However, she woke up a few days ago and discovered the critters again, describing the scene as “something out of a horror movie.” Yuck! Here are the pictures she sent us: 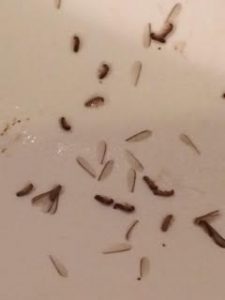 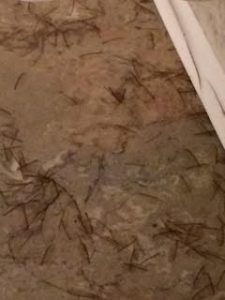 In the first photograph you can see the creatures at different stages of development. Some are the thin brown worm-like organisms, other are thicker, and finally there is one with clearly developed wings. We think the thin brown creatures are larvae, the thicker is the pupae (the larvae going under transformation to become an adult), and the winged-creature is the mature state of the creature. The second photograph shows a ton of the larvae covering the floor.
Unfortunately, we can’t determine what specifically our reader is dealing with. We don’t think it is Indian meal moth larvae because the larvae are usually lighter in color and the mature moths don’t resemble the winged-organism in the first photograph. The larvae also don’t resemble midge fly larvae, also known as bloodworms. We suppose the larvae could be drain fly larvae, but finding them all over the house wouldn’t make sense.
When dealing with unwanted creatures in a home, the first step is to figure out where they are coming from. However, it seems that our reader truly has no idea because they are everywhere. Therefore, we recommend that our reader call in a professional to assess the situation. They will be able to analyze the creatures in person, and will hopefully be able to identify them and come up with some treatment options.
To wrap up, one of our readers found brown worm-like organisms all over her house. Sadly, we are stumped as to what these critters are and how they are getting into her home. If any other readers have dealt with a similar situation, or recognize the creatures in the photo, we encourage them to comment and share their experiences.

Article Name
Worms in House are "Something Out of a Horror Movie"
Description
One of our readers found brown worm-like organisms all over her house. Sadly, we are stumped as to what these critters are and how they are getting into her home.
Author
Dori Franklin
Comments: 1 Posted by: Worm Researcher Dori Categories: Worms Found in the House