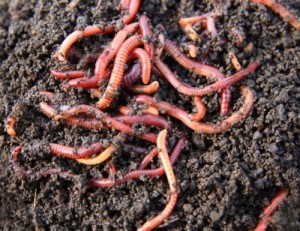 One of readers told us in a comment that he found worms in his compost bin. He wonders if these worms are good or bad for his compost bin. This is a really great question! He didn’t provide pictures or descriptions of the worms that are residing in his bin, so we will discuss some of the potential creatures that he might have discovered. We say some and not all of the potential creatures because if we went through all of them the list would be endless!

Some people start a compost bin without intentionally introducing any worms to aid the decomposition. However, other people purchase and introduce specific worms to help their compost bin thrive. Composting with worms is now referred to as vermicomposting, and it has become quite popular across the globe.  Red wigglers, or the kings of composting, are the most common worms used for composting around the world. People often buy red wigglers specifically for the purpose of composting because they are excellent at breaking down organic molecules in decaying matter. If the worms our reader found look like red earthworms, they are probably red wigglers, and they are very good for his compost. (Red wigglers are featured in the photo shown above.) If the creatures he found are round, brown, and segmented, they are likely black soldier fly larvae. Like red wigglers, these larva can easily break down decaying matter. We have heard from many readers who have found black soldier fly larva in their compost bins, or near other trash receptacles.

Red wigglers and black soldier fly larvae are the two most common worms we write about when we answer questions about vermicomposting. There are many worms that our reader could have found in his compost bin, but without a description or photo, we can’t determine if these worms are beneficial or harmful to his compost. Generally, worms are usually good for decomposing matter, but we can’t confirm this is the case for this specific instance. We encourage our reader to send us more information if he is unsatisfied with this answer!

In conclusion, one of our reader’s found some worms in his compost bin. He wonders if they are good or bad for his compost. We think they are probably beneficial, but we cannot ensure this is the case without more information.

Article Name
Worms in Compost Bin
Description
One of readers told us in a comment that he found worms in his compost worms. He wonders if these worms are good or bad for his compost bin.
Author
Dori Franklin
Comments: 0 Posted by: Worm Researcher Dori Categories: Composting Worms