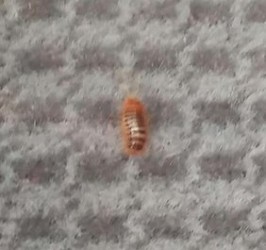 Worms in Carpet and Clothing

A reader wrote to us the other day about “carpet worms, carpet beetles, and possibly a moth worm” that she has seen moving in her carpet. The worms and beetles, which we’ll define more precisely below, are also eating holes in her shirt and “causing” lint to build up. The infestation has gotten so bad that the reader feel pricks when she walks around the carpet. For obvious reasons, she wants to get of the worms and beetles she is finding, and she wrote to us for help.

The reader didn’t submit a photo with her question, but we do know that she found “carpet worms, carpet beetles, and possibly a moth worm.” We are basically certain the reader means she is finding carpet beetles and carpet beetle larvae, a very common insect that people find in their homes, and a creature that we have written about dozens of times before. Everything about our reader’s situation – from where the creatures are being found (the carpet) to what they are doing (burrowing through clothing) – suggests a carpet beetle infestation, so we will move forward with this fact in mind.

In the many times we have written about them, getting rid of carpet beetle larvae has obviously come up. We have written on the topic in general, and also about specific situations, like when the beetles and their larval form are found under furniture, in towel closets, and on mattresses. There isn’t much use in repeating information, so we’ll just call our reader’s attention to these articles, which she should consult to help address her situation. There are also a lot of really good online guides to carpet beetles, like the one produced by the University of California’s Integrated Pest Management program.

Before concluding, a couple of specific things about our reader’s situation are worth commenting on. First, we aren’t really sure how the carpet beetle larvae could be “causing” lint to accumulate around the house, and in fact we think the reader might have things backwards, such that the accumulations of lint are drawing the larvae together. One way to deter carpet beetle infestations is to be fastidious about cleaning up things like lint build ups in the various nooks and crannies of a house. Second, the reader mentioned that this problem has been going on for two years, so we feel compelled to note that she really should take immediate and thorough action, and also that she might need to consult a pest removal expert at this late stage. It might be possible to eliminate the infestation with nothing but extremely thorough cleaning and potentially targeted insecticide use, but the problem with long-term infestations is that the larvae can become embedded in large objects like furniture, from which they are very difficult to remove. We don’t want to alarm our reader, but two years is a long time to be dealing with a household pest, and if it hurts to walk around her house, it seems like the problem has gotten pretty out of hand.

We wish our reader the best of luck and hope she is able to swiftly and successfully remove the infestation.

Article Name
Worms in Carpet and Clothing
Description
A reader wrote to us the other day about "carpet worms, carpet beetles, and possibly a moth worm" that she has seen moving in her carpet.
Author
All About Worms
Comments: 0 Posted by: Worm Researcher Evan Categories: Pest Worms