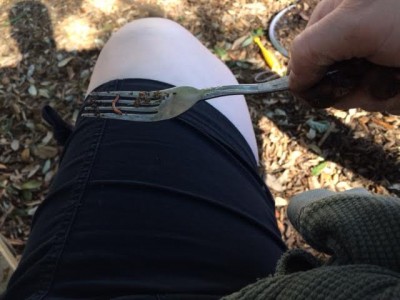 Today we heard from a preschool teacher writing from northern Texas. While digging in the recreation field at the preschool he works at, he dug up some small worm-like organisms: 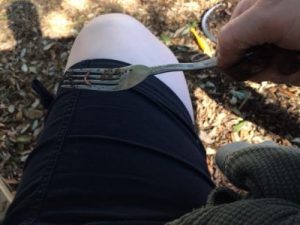 The recreation field is made up of decomposing wood chips and dirt. He wonders what these critters are and if they are safe or unsafe. So what could these small creatures be?

The fork in this photo provides an excellent scale to measure the worm against. The creature in question appears to be about half an inch long. Additionally, we think the worm could be segmented, but the photo isn’t clear enough to truly decipher the texture. Finally, the specimen appears to be reddish brown in color.

Our first idea was that our reader found earthworms or red wigglers (a species of earthworm). Both fit the general description (reddish brown, segmented)  and are likely contenders for living in decomposing wood and dirt. However, both red wigglers and earthworms are usually considerably larger than the worm our reader sent us a photograph of. While there is a possibility that it is indeed a red wiggler or earthworm, albeit a tiny one, we aren’t convinced that its a perfect match.

We think another possible match is a wireworm. Despite having the word “worm” in their name, wireworms aren’t actually worms, they are larvae. Wireworms eventually pupate and mature into click beetles. Wireworms live completely underground, feeding on bulbs, seeds, and roots. Wireworms have three small pairs of legs just behind their head. If the organisms our reader found have these described legs, they are likely wireworms!

Of course, there are many other types of larvae and worms that look similar to the specimens our reader dug up. Without being certain of the species, we cannot guarantee that the creatures are safe. However, we think that these worm-like organisms are probably harmless and that our reader shouldn’t worry too much about their presence in the recreation field.

To end, one of our readers dug up some tiny reddish worms. We believe they might be wireworms or another type of larvae, and we don’t believe they are unsafe!

Article Name
Worms Found in Wood Chips Probably Safe
Description
One of our readers dug up some tiny reddish worms. We believe they might be wireworms or another type of larvae, and we don't believe they are unsafe!
Author
Dori Franklin
Comments: 1 Posted by: Worm Researcher Dori Categories: Earthworms, Garden Worms