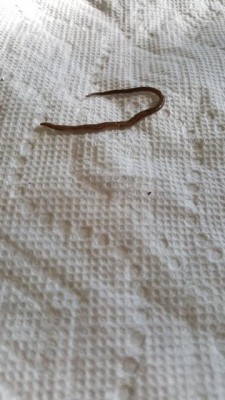 One of our readers reached out to us from Sarasota, Florida. She found a few worm-like organisms on her porch. One creature was alive (featured in the first photo) and the other was curled up and dying (featured in the second photo.) She explained that the living organism was 3-4 inches long, with thin dark stripes on the top and a lighter belly. Here are the photographs she included: 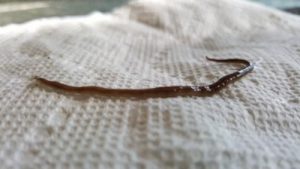 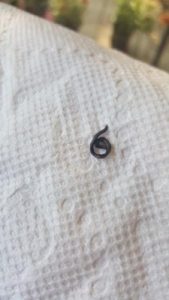 She explained that the yard surrounding her porch is mostly mud. It is too wet for grass, but there are plenty of ferns, Mexican petunias, and Mexican Hydrangeas. After finding these worms she dove into internet research and at first thought these creatures could be flatworms. However, she doesn’t think they are flat enough to be flatworms. She wants to know if they are poisonous, as her cats are often out on the porch.

So, while we aren’t 100% confident that our reader has discovered flatworms on her porch, we think there is a good chance. We don’t believe these worms are pose any threat to her cats. However, if her cats begin to display any strange symptoms we encourage our reader to take them to the vet to be examined.

To conclude, a reader discovered a few brown worms on her porch. While we think they could actually be terrestrial flatworms, and we don’t have a better identification, if any of our readers in Florida have other ideas, please let us know in a comment!