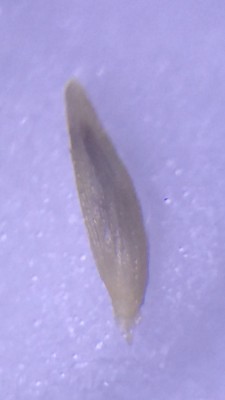 Share the knowledge
A reader from Coraopolis, Pennsylvania recently sent us a message. She wrote, “I keep finding things like this in my house; floor, bed, couch, and clothes. Could you please tell me what they are and how to get rid of them.” Based on her message we thought that she was dealing with one type of specimen that appeared in all the areas of her home that she mentioned. However, after looking at the photographs accompanying her message, we realize this isn’t the case. She sent us several pictures, but we aren’t able to easily identify the specimens in the photos. In the first photo, the worm-like organism is the easiest to see: 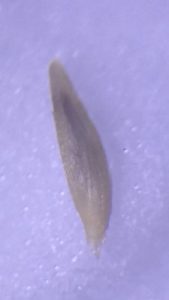 Our reader didn’t specify which area she found which worm-like organism in, so we don’t know where exactly she found this creature. The specimen looks a little bit like a leech, but we don’t have a good enough view of it to make a confident identification, especially without details about where it was found or its behaviors. We dedicated a whole article to this point, but we will touch on it again. Knowing specifically where a worm is found can be a crucial hint to identifying the specimen since the location often reveals what the food source is, and knowing food source is one of the easiest ways to identify pests. So, while we will share the photos our reader sent, we won’t be able to confidently identify the specimens in them. 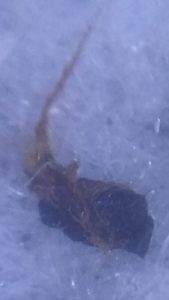 In this next photo, we again aren’t totally sure what we are looking at. We aren’t sure if the light brown area is the worm-like organism or if it is the bigger black object. If it is the black object, this could be a black soldier fly larva, but again this is a just a loose guess based on appearance. Unfortunately, due to the limited information, we can’t identify this specimen and we don’t think it would be useful for us to name off any creature it might be because the list would go on for ages. 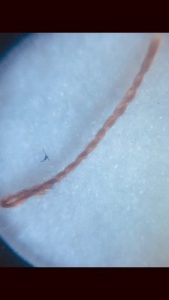 In the final photograph we think the worm-like organism is the tiny black string-looking thing next to the brown braid. We don’t know what this creature is. While we can’t offer much help identifying the specimens in our reader’s home, we can offer some insight on the overall situation.

Since our reader is dealing with several different types of specimens all throughout her home, we think she should focus on sealing up the entryways that they are sneaking in through and deep cleaning her home. Small gaps between walls, windows, doors, and vents are easily accessible entrances for tiny worms and worm like organisms. Sealing off these openings will prevent future pests from getting in. In addition, deep cleaning her home will surely help limit the number of specimens living and breeding inside. Our reader should clean all of the rooms of her home thoroughly for at least a few weeks, or until she isn’t dealing with any more worm-like organisms. She should be sure to vacuum, sweep, dust, wipe down surfaces, and do laundry. Tiny particles scattered throughout a home are often food sources for small creatures, so eliminating these are crucial to successfully saying goodbye to unwanted organisms!

In conclusion, we weren’t able to identify the worm-like organisms our reader found throughout her home, but we think sealing up entryways and thoroughly cleaning her house will be two good steps to take in order to get rid of them. If any of our other readers recognize the specimens in the photos, we invite them to comment below.

Article Name
Worms Found All Over Pennsylvania Home
Description
We weren't able to identify the worm-like organisms our reader found throughout her home, but we think sealing up entryways and thoroughly cleaning her house will be two good steps to take in order to get rid of them.
Author
Dori Franklin
Share the knowledge