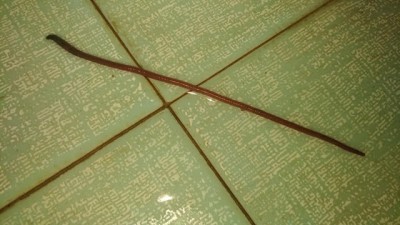 A reader recently reached out to us because he discovered some worms coming from the cracks between his tile floor. He is curious about what kind of specimens he is dealing with and would also like to know how he can get rid of them. He sent us several photographs that clearly display the organism on the tile floor. The creature in question is a purplish-brownish color. It appears to be have a segmented body and to be several inches long: 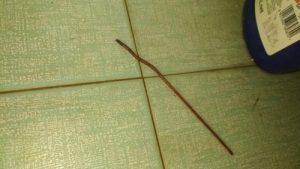 Could this be an earthworm? So far, both the description and the image lead us to believe that our reader is indeed dealing with earthworms. Earthworms are segmented worms that belong to the phylum Annelida. Some are brown, others are purple, gray, or red, and some are a combination of all four colors. Most earthworms grow to be a few inches long, but some grow to be over a foot long! Although the size and color of an earthworm can vary a lot, most earthworms are still recognizable since they have some key identifying features. All earthworms have tube-shaped, segmented bodies with a clitellum (a raised band containing the reproductive organs.) 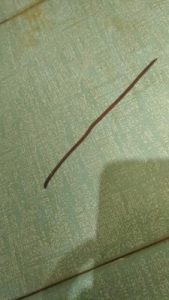 So, the color, size, shape, and segmentation all match with the appearance of an earthworm. The only identifying feature missing is the clitellum. Of course, just because we don’t see it doesn’t mean that it isn’t there. Even though we can’t see the clitellum on this organism, we are still pretty sure that it is an earthworm: 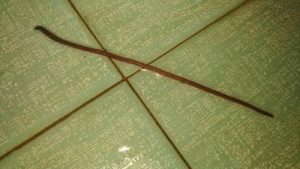 While we are convinced that we know the identity of this specimen, we aren’t as sure about how or why it is coming from our reader’s tiles. Earthworms live in moist soil where they can feed on living and dead organic matter. Maybe these worms have somehow gotten beneath the tiles from the outside world and are now crawling in between the tiles. Regardless of how these creatures are sneaking in, we have a few suggestions for our reader about getting rid of these worms.

First, our reader should thoroughly clean the room to eliminate any potential food sources for these worms. He can dust, sweep, vacuum and scrub down all surfaces. Next, he might consider redoing the caulking between his tiles. This should prevent worms from being able to sneak in between the tiles. If this task seems daunting, he can look into hiring a professional to complete the job. Finally, he should make sure that his home is properly sealed to prevent earthworms and other specimens from sneaking into his house. He should check his doors, windows, and vents for any gaps that could be serving as entryways. Sealing these will keep unwanted organisms out of his home. We hope our reader is able to say goodbye to these earthworms!

To end, a reader sent us photographs of some long worms he found crawling between the cracks on his tile floor. We believe he is dealing with earthworms, and he might need to caulk his tile floor in order to get rid of these organisms.

Article Name
Worms Coming From Tile Cracks Might be Earthworms
Description
A reader sent us photographs of some long worms he found crawling between the cracks on his tile floor. We believe he is dealing with earthworms, and he might need to caulk his tile floor in order to get rid of these organisms.
Author
Dori Franklin
Comments: 1 Posted by: Worm Researcher Dori Categories: Earthworms