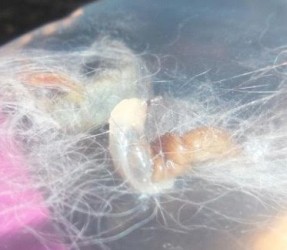 We received a puzzling question recently about some worms that our reader found in the hair of her cat. The worms (or whatever they are) have been caught in the cat’s hair on a couple of different occasions, and the reader is concerned that they might be harmful to her cat in one way or another. They might just be getting caught in the cat’s fur, posing no threat, but they also might be “something worse feeding off him [the cat].” The reader offers a lot of information and a picture, so we’ll try to make some sense of the situation with what we were presented with.

This is a strange picture, and it is even harder to make sense of in light of some of the things our reader told us about the creature. First, they “look like little worms,” but as “they move around they stretch out.” They also have “little things on their heads like a snail would,” although this is hard to see in the picture. Finally, and perhaps most alarmingly, the creatures sometimes appear to be “full of blood but then turned back to their color.”

What is so strange about this combination of features is that they seem to describe a couple of different things at once. The reader begins by speculating that she found some sort of worm, but then says it actually looks more like a snail because of the things on their head. The things she is referring to are probably tentacles, and she also must mean a slug, which are just snails without shells. However, she also mentions that the creatures stretch out when they move and might be filled with blood, which sounds like a leech.

Both leeches and slugs are elongated, worm-like creatures, so either could be mistaken for a worm, and therefore both seem like possibilities. (Something like a tick, which could also feed on a pet’s blood, likely wouldn’t be mistaken for a worm.) However, without more information to work with, we don’t want to offer a definite suggestion. (For the record, and in case you are wondering why we aren’t referring to it more, the picture isn’t really helping us with the identification. It doesn’t show the creature clearly, so we can’t use it to confirm or rule out leeches or slugs.) If the creature is, as seems to be implied, just caught in the cat’s fur, as opposed to burrowed beneath it on its skin, it seems like it might just be a slug that ended up in an unusual place. However, this wouldn’t explain the creature appearing to be “full of blood,” a description that is of course more likely to be associated with a leech. But then a leech doesn’t have tentacles, so we don’t know what to make of the “little things on their heads like a snail.”

For now, our reader should probably just watch her cat closely and make sure to check its body carefully, as this will likely help her figure out exactly what she found on her cat. Alternatively, she might not find anything else on her cat from here on out, and in which case she doesn’t have to worry about the issue any longer.

Article Name
Worms Caught in Cat Hair
Description
We received a puzzling question recently about some worms that our reader found in the hair of her cat.
Author
All About Worms
Comments: 0 Posted by: Worm Researcher Evan Categories: Gross Worms