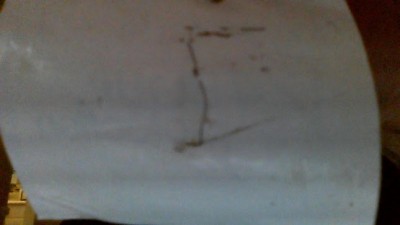 “These worms have burrowed throughout my entire skin from head to toe” says this reader, who sends in a photograph of fragments of a worm he found on his scalp. Despite having ideas of what the worm may be, our reader would still like our help in determining what the worm is. 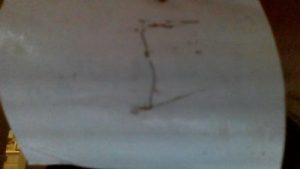 The first thing we have to address is that we will unfortunately not be able to fulfill our reader’s request. His situation is clearly medical in nature, seeing as he has stated that the worms burrow into his skin and that he has experienced “symptoms”. As we are not medical professionals, we are not qualified to identify worms of this nature, and so instead we urge our reader to get in touch with a medical professional instead to get the worms properly identified and thereby treated. Nonetheless, we will lay out the context our reader provided so that if any of our other readers can relate to his problem, then they too know that they should seek medical help.

As previously mentioned, our reader has had worms burrow into his skin throughout his entire body. He says he believes “it is a filarial worm” (a parasitic roundworm that is contracted through mosquito bites) “because of the symptoms and size.” Upon discovering one of the worms, he “cut it in half while watching it move” after which the worm began to “spit out brown stuff.” The cut up worm in question, we are told, is what we are seeing in the photograph above and is from our reader’s “scalp after taking ivermectin one night.” Although we cannot advise on medical issues, what we can say is that we do not recommend cutting up any worm one finds. This is because, if one thinks the worm is connected to a medical issue, mutilating it in any way may render the worm unrecognizable, so when the worm is brought to a physician, or county extension office, the expert will have a far more difficult time identifying the worm. We recommend putting any worms one finds (that one wants identified) in a container with air holes and perhaps some food (though if it is a parasite, this might be futile) and then bringing it to someone who can identify the worm and thus solve one’s issue.

So, who does one seek out to identify and treat such a problem? The obvious answer would be one’s GP or an ER doctor. However, although GPs and ER doctors are extremely skilled in the fields that they practice, and generally do their jobs very well, most doctors are not trained to deal with parasitic infections. For that reason, we tend to recommend to our readers that they instead seek out a specialist who will be able to deal with such a problem. An infectious disease specialist will be able to tell their patient if their medical condition is being caused by a parasitic worm (or other parasite), a fungus, bacteria or something else entirely. To find one, our reader can simply Google ‘infectious disease physician (name of his closest big city)’ or ‘travel disease doctor (name of his closest big city)’. Further to this, bringing samples to a local county extension office or entomology department at a university prior to one’s visit with a specialist will give the reader multiple opinions to bring to the table when he does go for his visit. But regardless if one tries to get the worms identified prior to a medical consultation, we at least recommend bringing a sample to the physician themselves.

To conclude, we are not able to identify the worm that is troubling our reader. We do hope that he seeks medical help as soon as possible and that he gets this treated quickly. We also hope that despite not being able to directly help our reader, we might have enlightened him to a few places he can go to seek help for this issue. The best of luck to him!

Article Name
Worms Burrow Into Man Who Fears He Has Filariasis
Description
"These worms have burrowed throughout my entire skin from head to toe" says this reader, who sends in a photograph of fragments of a worm he found on his scalp. Despite having ideas of what the worm may be, our reader would still like our help in determining what the worm is.
Author
Worm Researcher Anton
Share the knowledge