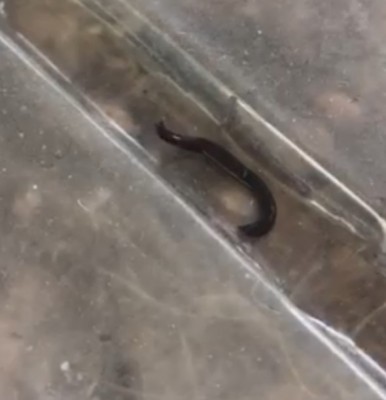 We just heard from a reader who is hopeful that we can identify a worm she discovered. In her message she explained that her dog rested his chin on her leg, and when he moved away, a small worm was stuck with a tiny piece of grass to her leg.  She said it was black, but possibly had a lighter-colored underbelly. The worm in question moved around a lot initially, and lifted up either its tail end or head end (she couldn’t discern the two) rapidly. Finally, she told us that the creature could condense itself into a small blob, and then extend itself to be 1.5-2 inches long. She is worried that this specimen might be harmful to her family and/or pets and is searching for answers to bring her peace of mind. Here are some snapshots of the specimen: 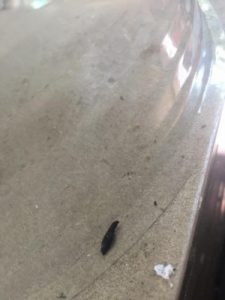 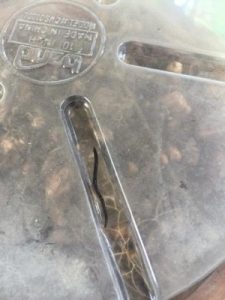 Although we are not familiar with every single parasite that might cause harm to a pet, we are fairly certain that this worm is harmless. We believe that our reader has either found a terrestrial flatworm or a leech.

Leeches are black with a lighter underside, just like the worm our reader described. However, most leeches live in aquatic environments. If our reader was sitting near a body of water when this discovery was made, then  the creature-in-question could be a leech. If she wasn’t near any water, we think it very possible that the specimen is a terrestrial flatworm.

There are a ton of different species of terrestrial flatworms, which are also known as land planarians. They are similar in appearance to slugs and leeches, and are often confused for these species. Gardeners might find a terrestrial flatworm when they are moving stones around in their yard, especially after rain. Land planarians are not harmful to humans or domestic pets.

In summary, one of our readers noticed a black worm on her leg. We think this is probably a land planarian, or it could be a leech!

Summary
Article Name
Worm Found on Leg is Probably a Flatworm
Description
One of our readers noticed a black worm on her leg. We think this is probably a land planarian, or it could be a leech!
Author
Dori Franklin
Share the knowledge