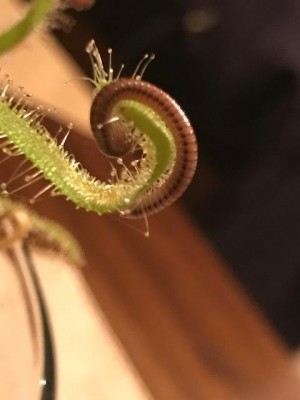 Worm With Tiny Legs In Bathtub Is A Millipede

This message recently came in from one of our readers, “This bug, which I think is a worm, but may have many tiny legs, was found in the bathtub while my daughter was bathing. It is about an inch long. These pictures are of it trying to escape my drosera.  Do you know what it is or if it is dangerous?” The photographs accompanying this message are truly spectacular! 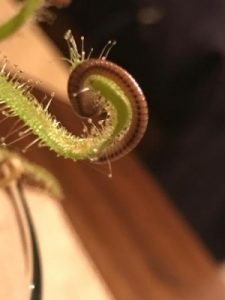 Although we are confident about the identity of this creature, we aren’t so confident about what it is doing in the bathtub. Millipedes generally live in dark and damp environments, like among the leaf litter on a forest floor, but they aren’t typically aquatic. Millipedes also aren’t usually considered to be household pests, though they do show up inside a home from time to time. As long as our reader only came across one of these arthropods, we don’t think he needs to worry about it. Millipedes aren’t known to be dangerous or harmful, so his daughter should be totally fine even if she came into contact with it. Of course if he is worried about the health of his daughter, he should take her to the doctor for a medical professional’s opinion.

To prevent other millipedes from coming into his house, our reader should investigate his doors, windows, and ventilation systems for small gaps and cracks that these arthropods, and other specimens, might be sneaking in through. Sealing up these small openings will be crucial to keeping small organisms out of his home. Also, he can clear away any leaf litter and other debris from the perimeter of his home. This will get rid of any hiding places for millipedes directly outside of his house, and reduce the number that might sneak in.

To conclude, one of our readers found a millipede in his bathtub. These arthropods aren’t dangerous or considered pests, so our reader shouldn’t spend too much time worrying about this organism. 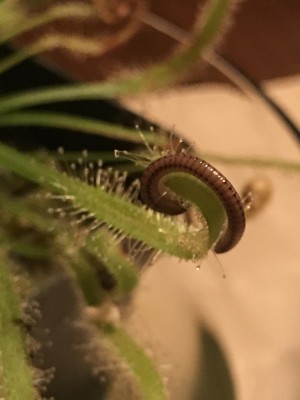 Article Name
Worm With Tiny Legs In Bathtub is a Millipede
Description
One of our readers found a millipede in his bathtub. These arthropods aren't dangerous or considered pests, so our reader shouldn't spend too much time worrying about this organism.
Author
Dori Franklin
Comments: 0 Posted by: Worm Researcher Dori Categories: Centipedes and Millipedes