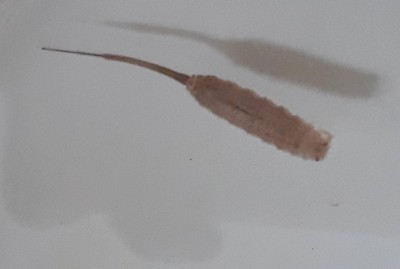 A concerned reader recently sent in this image of a worm-like creature he has been finding in his bathroom for the past two months. He says it is about an inch in length and “swims like a worm, contracting and extending its body”. Our reader is worried that this creature may have come from his stomach, and requests that we identify it. 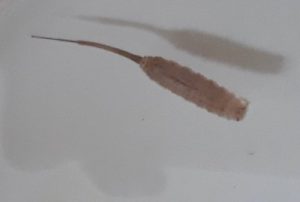 From the image, we can see that this creature has a slender, ridged body that seems to be transparent in color. Two small, black dots at its front seem to be a set of eyes, and a black stripe adorns its back, though given its transparency, it could very well be something inside the creature. What makes this critter interesting is its long tail, which seemingly spans the length of its body. The tail is segmented into two parts, one thicker part emerging from its body that thins out into the second part, the tip of the tail. Our reader did well in sending an assortment of pictures, including the one below which displays the creature bending its body to turn in the water. 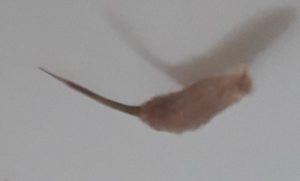 We are pleased to inform our reader that we have identified this worm as a rat-tailed maggot, and that he has little to worry about in terms of this being a medical problem. Rat-tailed maggots are the larval stage of a hover fly or drone fly. The two black dots at its head are actually antennae, according to the diagram below. The ridges on its sides are the beginnings of legs, and the tail is actually a respiratory tract that the larva uses to breathe in water. 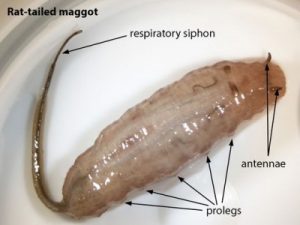 Rat-tailed maggots are most commonly found in stagnant water, according to the entomology department of the University of Kentucky. Locations they can be found include: lagoons, manure pits, and well, toilets. Although our reader did not specify where in his bathroom the creature was found, we will assume he found it in his toilet as it was swimming, and especially since he was concerned it may have come from his stomach. This makes sense, as toilet water is stagnant, and the maggots could be attracted to human waste, as they feed off decaying matter. We are aware this sounds disgusting, but it is necessary information!

On the other hand, they typically should not be found in your toilet. We recommend that our reader makes sure he cleans his toilet regularly (once a week preferably!) and removes the maggot from his toilet and moves it to a nearby pond/puddle in a park. After their larval stage, the maggot will want to burrow into dry soil or other materials, so moving it to a location like this would be perfect. If not acted upon immediately, infestations can occur (although they are not common in regular households). As the reader said he has been finding these for the past two months, it is possible that an infestation has already occurred. Yet, as the picture only shows one maggot, and our reader has not mentioned there being more than one at a time, removing the maggot and cleaning his toilet regularly should suffice in preventing more maggots from coming.

Now, in regards to our reader’s concern about the rat-tailed maggot coming from his stomach, we do not think this should be a concern. As this creature is not parasitic to humans, it is far more likely that the maggot swam up through the pipes rather than that it came from his stomach. However, if our reader has reasonable cause to believe it did come from his stomach, we encourage him to seek a doctor and/or parasite specialist to get an accurate diagnosis and proper treatment. As we are not medical professionals, this is not an area in which we can provide advice in.

In conclusion, the creature that our reader found swimming in his bathroom is a rat-tailed maggot! Although they are not the prettiest of sights, rat-tailed maggots are harmless to humans and can easily be removed to prevent an infestation.

Article Name
Tailed Worm Found Swimming in Bathroom is a Rat-tailed Maggot
Description
A concerned reader recently sent in this image of a worm-like creature he has been finding in his bathroom for the past two months. He says it is about an inch in length and "swims like a worm, contracting and extending its body".
Author
Worm Researcher Anton
Share the knowledge

This many people searched for this info: 6,839