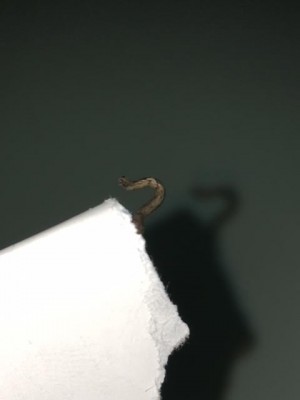 Worm with Interesting Movement Pattern is an Inchworm

Today we will identify a small creature found by one of our readers in Eastern Europe. He wrote that the creature is 8-9mm long and 1 mm wide with 6-10 tiny legs. When he discovered it, it was trapped in some spider webbing on a wall inside his house. He provided an excellent description of his observation of the creature’s movement pattern, “It moved always forwards, by moving its head, then putting its head on the ground, then moving its tail until it almost reached its head (at which point it looked like the greek omega letter, with the head and tail on the ground, and the middle part of the body in the air) then it ‘anchored’ its tail in the ground in order to move its head forwards and come back to a flat position, and so on, and so on.” The photograph he sent perfectly captures the specimen in motion: 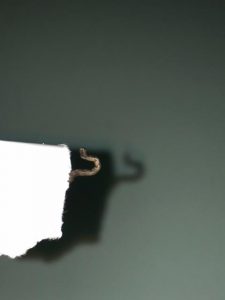 This is an inchworm! Inchworms are the larvae of Geometer moths, which technically makes them caterpillars, not worms. Inchworms are actually named for their unique movement pattern because they appear to be measuring the earth inch by inch as they move forward. Our reader can check out this article to watch a video of an inchworm moving.

There are over 35,000 species of inchworms around the world. While all move in their signature movement pattern, not all inchworms look the same. They can vary a lot in color (green, brown, and grey) and some have filaments (long, slender protuberances that look almost like legs sticking out of their back) while others are smooth. Inchworms also spin silk, so it’s very likely that the “spider webbing” our reader found this creature in was actually silk from the inchworm itself. We don’t know why this inchworm was in our reader’s home. Inchworms are sometimes considered pests by gardeners and farmers because they eat crops, but they aren’t household pests. Our reader can place this caterpillar outside and seal up his windows, doors, and vents to keep other creatures from sneaking into his home.

In conclusion, a reader sent us photo and a fabulous description of a tiny worm-like organism he found on a wall in his home. We are confident that he is dealing with an inchworm!

Article Name
Worm with Interesting Movement Pattern is an Inchworm
Description
A reader sent us photo and a fabulous description of a tiny worm-like organism he found on a wall in his home. We are confident that he is dealing with an inchworm!
Author
Dori Franklin
Comments: 0 Posted by: Worm Researcher Dori Categories: Caterpillars, Inch Worms