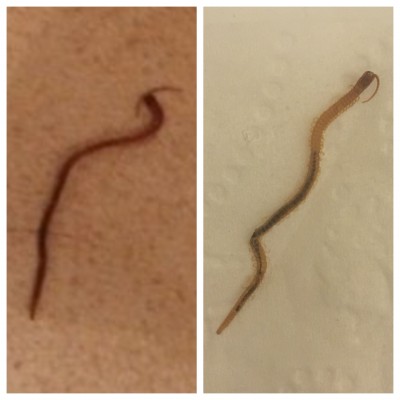 Worm With Antennae and Tiny Legs Is A Centipede

A reader recently reached out to us from the Bay Area. She found a worm-like organism dead on her bathroom floor. She looked through our site and found a photograph of a specimen that looked similar, but we weren’t able to provide an identification for that creature. The photograph she sent shows the photograph she found on our site on the left, and the creature she found in her bathroom on the right: 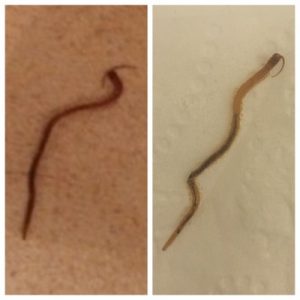 She said the creature is about 3 inches long, has antennae attached to its head, and legs so small that she didn’t notice them without her reading glasses on. She thinks it might be some sort of millipede. Well, this isn’t a millipede, but she is on the right track… We believe this is a centipede!

Centipedes and millipedes are both arthropods, not worms. They are often mistaken for each other because of their similar physical characteristics like antennae, legs, and segmented bodies. There are, however, a few small differences between the two that make identifying them much easier. For one, while both have segmented bodies, millipedes typically have rounder bodies and centipedes have flat bodies. Also, centipedes have just one pair of jointed legs per body segment while millipedes have two pairs per segment. Finally, millipedes are detritivores that feed on decaying wood and leaf litter, but centipedes are carnivores! They eat insects such as spiders, worms, and even other centipedes! Here is a picture of a millipede so that our reader can compare it to the centipede she found: 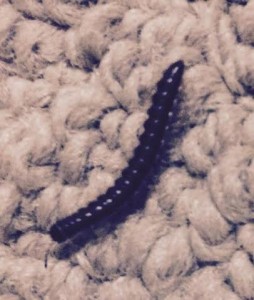 Although we don’t know why exactly this centipede appeared in our reader’s bathroom, we can assure her that it is nothing to worry about. Everyone’s home probably has at least one centipede living rent-free in the basement or under the sink. These arthropods like darkness and moisture, and since they are nocturnal, most people just never see them. Our reader can make her home less hospitable to centipedes and other worm-like organisms by keeping it clean and debris-free and by installing a dehumidifier to reduce moisture levels.

To sum up, we believe the dead creature our reader found in her bathroom is a centipede. These arthropods are commonly discovered in homes and shouldn’t be a cause for concern.

Article Name
Worm With Antennae and Tiny Legs Is A Centipede
Description
The dead creature our reader found in her bathroom is a centipede. These arthropods are commonly discovered in homes and shouldn't be a cause for concern.
Author
Dori Franklin
Comments: 1 Posted by: Worm Researcher Dori Categories: Centipedes and Millipedes