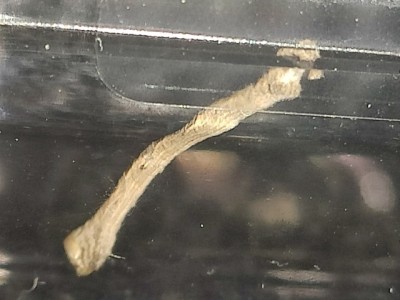 “You are my last hope or I’m about to call it an alien invasion” says this reader, starting her query off with a bang. This beige, wood-colored worm-like creature “has no legs on the middle part of his body” and as a result “walks quite strange.” 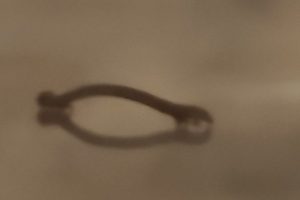 Additionally, our reader adds that the caterpillar’s head is bigger than the rest of its body, and “lowkey looks like an apple stem.” The creature “acted dead at first” but when our reader touched it, it curled up. Our reader, who is based in Poland, concludes her submission by saying that she would love to know “whatever alien vs predator type of thing it is” and finally bids us a nice day and thanks us for our “awesome page.” To the latter part of that, we wish our reader a nice day as well, and thank her for the compliment. To the former part of that, we wish to assure our reader that this is no “alien” creature, but rather is simply an inchworm. 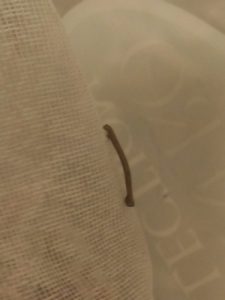 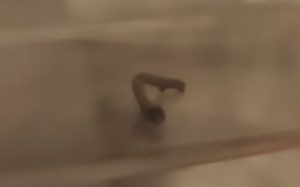 The term ‘inchworm’ is vaguely defined, but generally refers to moth caterpillars in North America that are generally of the same disposition. What we mean by this is that all inchworms have legs on both ends of their bodies, but not in the middle, and thus they have to walk in the way that they do, arching their back and ‘inching’ their way across a surface. This is what gives our reader’s worm its apparent alien appearance. What our reader calls its “legs/hooks” are just its legs. Inchworms do not have hooks, nor any other kind of sharp or dangerous appendage; they are completely harmless. Its head being bigger than the rest of its body is just a common characteristic of caterpillars in general, so that is nothing our reader needs fret over. Of course, since ‘inchworm’ is an umbrella term and includes various species of moths, there are no definite facts we can give about them all, but generally their diet consists of the leaves and fruits of various plants and as such can be incredibly destructive in large numbers, and most species possess a defense mechanism by which they can spin a string of silk upon immediate danger to escape the clutches of a predator and hang off whatever leaf they were feeding on. 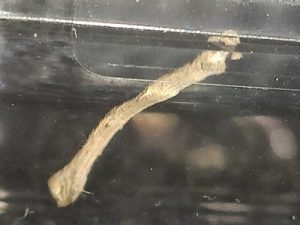 In conclusion, the worm our reader found is an inchworm of some sort, though it is difficult to say for certain which species (given that there are thousands). We hope that this article is able to calm our reader down and put her mind at ease that her home is indeed not the first known target of an alien invasion. If our reader wishes to find out more about the inchworm, she is more than welcome to check out a past article of ours detailing a brief guide to inchworms.

Article Name
Worm that Reminds Woman of "Alien vs Predator" is Just an Inchworm
Description
"You are my last hope or I'm about to call it an alien invasion" says this reader, starting her query off with a bang. This beige, wood-colored worm-like creature "has no legs on the middle part of his body" and as a result "walks quite strange."
Author
Worm Researcher Anton
Comments: 0 Posted by: All About Worms Categories: Caterpillars, Garden Worms, Inch Worms