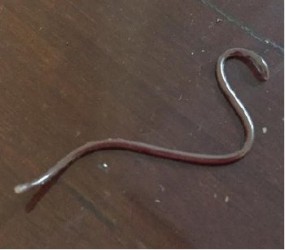 Worm on Floor in Singapore

A reader recently sent us a great picture of a worm he found in Singapore on his hardwood floor. The worm is relatively long and skinny, and its body color might be roughly described as translucently gray. Overall, it is a fairly nondescript creature – not in the sense that it isn’t interesting looking, but only because it doesn’t have any clear markings or body features. Its plainness is almost an aesthetic onto itself. What is this worm on the floor in Singapore?

First, here the picture the reader submitted along with his question:

Despite this excellent picture, we are having a lot of trouble making a possible identification. Obviously, we can’t simply look at a picture of any given worm or worm-like creature and identify it, and we also aren’t particularly familiar with the worm species of Singapore. That said, we are confident the reader is in fact finding a worm, as opposed to an insect larva or some other elongated, cylindrical creature. Given the widespread semantic abuse that the word “worm” is subjected to – it is a profoundly imprecise word in common speech – identifying what our reader found as a worm, as we understand the word “worm,” is actually more helpful than you might imagine.

But it’s not that helpful, as we are still left with thousands of different worm species that our reader might have found, and we aren’t exactly sure where to go from here. Obviously, he found some sort of terrestrial species, or it wouldn’t have turned up in his house, so in any given phylum he looks, this will always limit the number of possibilities. For example, if our reader found something from the phylum Platyhelminthes, which is composed of the so-called “flatworms,” the total number of terrestrial species is comparatively small. (Of the 15,000 flatworms, less than a 1,000 are terrestrial.) We mention flatworms because one of the most common worms people find in their houses are hammerhead worms, which are Platyhelminthes. We don’t think our reader found a hammerhead worm specifically because the creature above lacks the hammerhead’s characteristic, well, hammer-like head, but perhaps he found a related species. This creature would be a land planarian, which make up the Geoplanidae family, but it would belong to different genus than the hammerhead worm, which belong to the genus Bipalium.

It is also possible our reader found something in the annelid phylum, but it can’t be a clitellate because the creature above appears to lack a clitellum – the bump around the middle of earthworms (among other clitellates). This means that our reader didn’t find one of the many common species of earthworm. This would mean that he found a terrestrial annelid that is not a clitellate, which are fairly rare.

Unfortunately, we must conclude with uncertainly. We don’t know what our reader found, but perhaps we’ve pointed him in a couple of helpful directions. If he can look into things like the land planarians and the clitellum-lacking annelids of Singapore, he might be able to figure out what he found.

Article Name
Fishing with Hammerhead Worms
Description
A reader recently sent us a great picture of a worm he found in Singapore on his hardwood floor.
Author
All About Worms
Comments: 1 Posted by: Worm Researcher Evan Categories: Interesting Worms