One of our readers recently sent us a message from Kigali, Rwanda. He explained that he and his girlfriend have been spotting a mysterious worm in their toilet from time to time. They have been flushing hot water down their toilet in efforts to get rid of it, but it still appears occasionally. They even noticed it on the kitchen floor near the sink once. They aren’t sure if it’s the same worm every time, or if it’s several worms that are just the same type of worm. He is hoping we are able to identify the creature and provide some insight on why it has made itself so comfortable in their house. The first photograph shows the specimen on a tile floor: 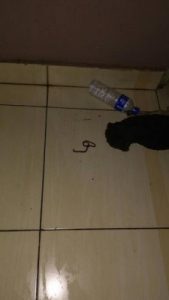 This is a great photo! Although we can’t see a ton of detail about the worm, the tile floor and the water bottle act as scales and allow us to accurately estimate the size of the organism. We believe this specimen is about 3-4 inches long. We can also see that it is thin and dark colored: 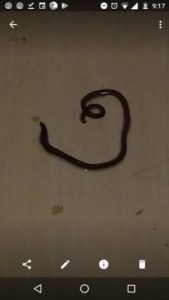 We think this might be an earthworm. Earthworms are among the most common worms that readers discover in their toilets that aren’t parasitic. They need a wet environment to survive, since their skin must remain moist in order for them to breathe. To confirm that a worm is actually an earthworm, we usually focus on the size, shape, color, segmented skin, and sometimes the presence of a clitellum. Earthworms are usually just a few inches long, but some grow to be over a foot long. They range in color from brown to purple to red to grey. They have thin, segmented bodies with a clitellum near their head. The clitellum is a raised band that contains the reproductive organs of an earthworm. Although we don’t see the clitellum on this creature, we can clearly see the color and segmentation: 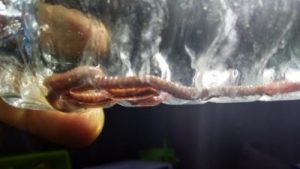 We are confident that our reader is indeed dealing with an earthworm, or perhaps a few. Unfortunately, we don’t know why these earthworms are in our reader’s home. Since earthworms aren’t household pests, they don’t usually infest a house in large numbers or destroy furniture or pantry goods. These earthworms might be sneaking in through an open door or window, or might be entering through a crack in the toilet plumbing system. Since he has been finding these worms for a while, we recommend he give his bathroom and house a thorough cleaning and check the windows and doors to make sure they are properly sealed. If he continues to find earthworms, he might want to reach out to a plumber to have a look at the pipes. On the bright side, earthworms aren’t harmful or dangerous!
In conclusion, a reader sent us some photos of a mysterious worm that has been popping up around his home. We are confident that the worm in question is an earthworm. 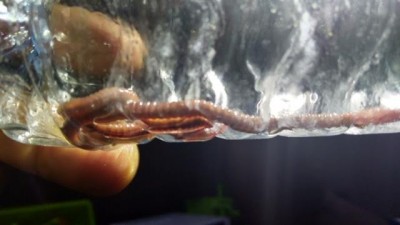 Article Name
Worm Living in Toilet Probably an Earthworm
Description
A reader sent us some photos of a mysterious worm that has been popping up around his home. We are confident that the worm in question is an earthworm.
Author
Dori Franklin
Comments: 0 Posted by: Worm Researcher Dori Categories: Earthworms