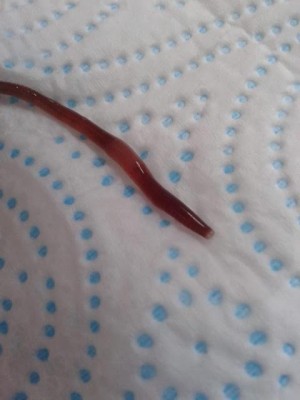 We just heard from a reader who came across a worm-like organism in her toilet bowl. She is very confused about how it got into the toilet. She doesn’t think it looks like a worm that would have come from a human, but wants to be sure that it didn’t come from her or anyone in her family. She is a bit grossed out, and wants to know what kind of worm this is. She sent us two photographs: 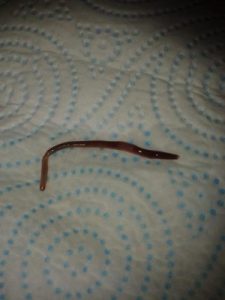 The first photograph shows the entire worm. It is a few inches long, a reddish brown color, and has a shiny appearance. Right off the bat, we agree with our reader, this likely did not come from a human. However, if our reader is truly worried about her health, we encourage her to see a doctor since we are not medical professionals and can not administer medical advice. So, if this isn’t a parasite, what could it be? Let’s take a closer look: 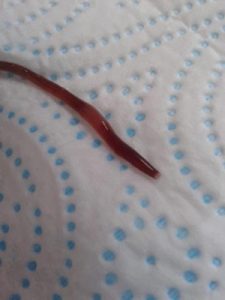 In this second photograph, we have a close-up view of the worm. We can see that it is segmented, and we also notice a swollen area near the end of the worm. We recognize this swollen area as a clitellum, which is a raised band made up of reproductive segments. We are confident that this creature is an earthworm!

Readers discover earthworms in their toilets fairly often, as we write about it at least once or twice a month! We can’t say for certain how it arrived in the toilet bowl. Since earthworms need moisture to survive, it might have crawled into the toilet seeking water. It might have been accidentally dragged into the house on a pet or shoe, or wandered in through an open door. Since she only found one of these worms, she should simply remove it and place it back outside!

In summary, one of our readers discovered a worm in her toilet bowl. We believe this specimen is an earthworm!

Article Name
Worm in Toilet Bowl Probably Earthworm
Description
One of our readers discovered a worm in her toilet bowl. We believe this specimen is an earthworm!
Author
Dori Franklin
Comments: 0 Posted by: Worm Researcher Dori Categories: Earthworms