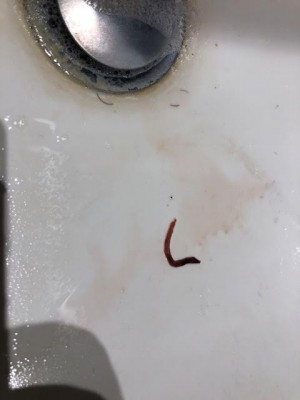 Worm in Toilet Bowl is Not Parasitic

We recently received this message from a concerned mom, “I found this worm in the toilet, fished it out & put it in the bathroom sink where I took this picture. It was not in a bowel movement. Might you know what sort of worm it is or how it got there? Very concerned to know if it is parasitic in nature, because I have two young sons, under the age of 5.” The photograph shows a reddish-brown worm-like organism: 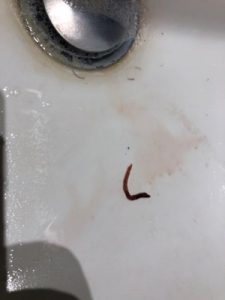 We are quite confident that this is not a parasitic worm! However, since we aren’t medical professionals, we encourage our reader to bring her sons to their doctor if she is concerned about their health. That being said, we believe this worm is either a bloodworm or an earthworm. We aren’t able to determine the identity because the two specimens can look quite similar, especially in photographs. Both bloodworms and earthworms are discovered in toilets by our readers occasionally. They are both red worms, though bloodworms are usually more strikingly red and earthworms are usually more brownish-red or purplish-red.

Bloodworms, which are actually midge fly larvae, feed on organic matter and usually show up in people’s bathrooms because the drains haven’t been thoroughly cleaned in a while. To get rid of bloodworms, our reader will need to scrub out her toilet using a cleaning agent used to eliminate organic matter. She will also need to ensure that there is nothing clogging the toilet and causing a build up of organic matter that might be serving as a food source for these larvae.

We haven’t solved the mystery of how earthworms end up in people’s toilets, but it happens more than one might think! We think an earthworm is sometimes pushed through the plumbing system and into a toilet after heavy rain. Since earthworms need moisture to survive, a toilet bowl is a much more appealing home for an earthworm than a dry wood floor. If what she found is an earthworm, we recommend she simply place the specimen outside. As long as she doesn’t continue to find specimens in her toilet, she has nothing to worry about.

In conclusion, one of our readers found a worm-like organism in her toilet bowl. We believe the specimen isn’t a parasite, but we aren’t sure if it is an earthworm or a bloodworm. If it is an earthworm she can simply remove it and place it outside. If it is a bloodworm, she will need to clean out her toilet. In either case, giving her toilet and bathroom a thorough cleaning is a good idea and will help prevent future potential infestations.

Article Name
Worm in Toilet Bowl is Not Parasitic
Description
One of our readers found a worm-like organism in her toilet bowl. We believe the specimen isn't a parasite, but we aren't sure if it is an earthworm or a bloodworm.
Author
Dori Franklin
Comments: 0 Posted by: Worm Researcher Dori Categories: Worms Found in the House