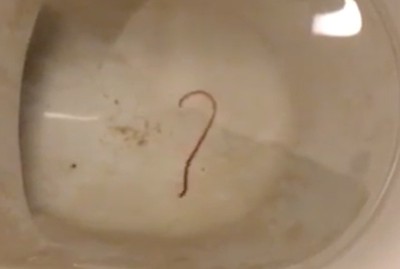 Worm in Toilet Bowl Could be Ascaris Worm or Earthworm

One of our readers recently discovered a worm in his toilet bowl, and sent us a video featuring it wiggling around. He explained that in addition to finding this creature he has been experiencing chronic rash for a few years and has been taking Allegra every day to deal with the itch. He wonders if the worm he discovered could be an ascaris worm, which he read can cause a skin rash. He sent us a video of the worm and we took some screenshots to post: 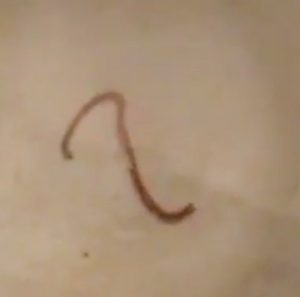 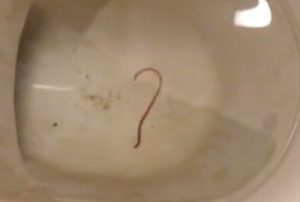 While we know that he discovered this worm in the toilet, our reader didn’t explain if the discovery occurred after he used the toilet, or if the worm simply appeared. This small detail can make a huge difference in identifying this worm.

Humans become infected with ascaris worms, or small intestinal roundworms, when they eat plants that have grown in soil where ascaris worms have deposited eggs. Ascaris worms are long, cream or light pink, and fusiform, which means both ends are pointed. However, this is a small detail we can’t make out from the video our reader sent. According to the Center for Disease Control and Prevention, most people that are infected with ascaris worms show no symptoms. However, some people might experience intestinal blockage or have a cough. We recommend that our reader visit a doctor as soon as possible. We aren’t medical professionals and therefore cannot give advice about this situation.

If our reader found this worm in the toilet, but he doesn’t think the worm is from him, we think it could be an earthworm. Earthworms end up in toilets fairly often, as they might travel up from the pipes. In fact, we write about this very scenario about once a month! If our reader did find an earthworm, he can remove it by hand and bring it back outside.