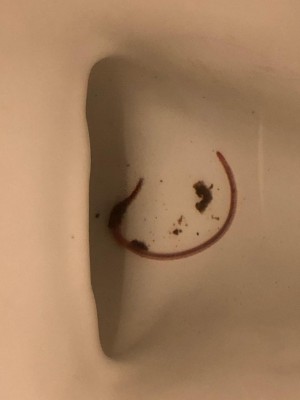 A reader in Buffalo, NY sent in a photograph of a long brown worm found in a toilet and asks if it is an ascaris worm, which is a type of roundworm. According to our reader, her bathroom has not been properly cleaned and the worm has been eating and growing inside the toilet. 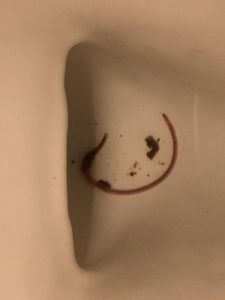 In addition to this, our reader states that creature does not look like an earthworm, which is a fair observation given the creature’s apparent lack of a clitellum. Furthermore, our reader is considering collecting the worm in a jar and bringing to her doctor to get it identified. First of all, we would agree with our reader that this looks like an ascaris worm (Ascaris lumbricoides). However, as ascaris worms mature in the bodies of the hosts they inhabit, it is very unlikely that it has been ‘eating’ and ‘growing’ in the toilet. The lifecycle of a roundworm, in short, is that the eggs of an ascaris roundworm are ingested, they hatch in the intestines, then the larvae travel to and from one’s lungs and intestines (unless one coughs them up when they travel up the throat), and then they mate in the intestines and repeat the process. It is possible to pass ascaris worm eggs, but not the live worms themselves, without medication that is.

Thus, this has us wondering if this really is an ascaris roundworm. Perhaps it is an earthworm, or something else. It is unclear from the image what the floating bits of matter next to the roundworm are, and if one of the pieces nearest the roundworm could in fact, be obscuring a clitellum. For when our reader says it absolutely does not look like an earthworm, it might be possible she is solely picturing the common earthworm we find in our gardens, when there are various species of earthworms that all look very different from one another. Of course, we are not ruling out the possibility of this being a roundworm either. If this is the case, then we urge our reader to consult a medical professional to make sure she is not infested with this worm, as the creature is parasitic in nature and can infest both humans and dogs. We would advise consulting a parasite specialist, rather than a doctor, as they will be more capable in diagnosing and treating a parasitic infestation. To find one, our reader can simply do a Google search for ‘infectious disease physician in Buffalo NY’ or ‘travel disease doctor in Buffalo NY’. Likewise, if our reader has any pets, taking them to the vet would be a good idea to make sure they are not infested either.

Secondly, while we think it is an excellent idea that our reader collects the worm in a jar to get it identified (though we advise caution when handling a parasite worm, and recommend wearing some form of hand-protection when doing so), we would suggest that instead of taking it to a doctor to get it identified, our reader should take the worm to her local county office extension or entomology department at a nearby university. Experts in those places will be far better equipped to identify this worm, as most doctors are actually not trained to identify or diagnose parasitic worm infestations.

Lastly, we urge our reader to ensure the consistent sanitation of her bathroom, as this will prevent the attraction of a plethora of creatures and worms alike, and is extremely important in maintaining the health of all of those who use the bathroom.

In conclusion, it is not entirely clear whether or not the worm our reader found was an ascaris roundworm, an earthworm, or something else entirely. If any of our other readers have an alternative identification of this worm, they should feel free to comment their suggestions in the comments section below. Otherwise, we recommend that our reader does take this worm to get identified, and that she also books appointments with a medical professional for herself and anyone that may be affected in order to ensure their health and safety.

Article Name
Worm in Toilet a Roundworm, Earthworm, or Something Else?
Description
A reader in Buffalo, NY sent in a photograph of a long brown worm found in a toilet and asks if it is an ascaris worm, which is a type of roundworm. According to our reader, her bathroom has not been properly cleaned and the worm has been eating and growing inside the toilet.
Author
Worm Researcher Anton
Share the knowledge