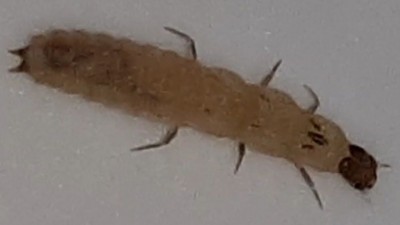 A reader recently wrote to us, “I found something in my sink that I’m hoping you can identify for me.” He included a photograph of a pale worm-like organism with a dark head and three sets of legs. Since the creature is posed next to his fingernail, we have a solid idea of how small it is: 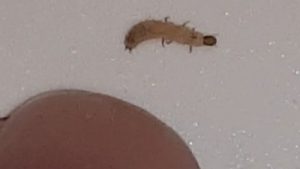 In addition to its dark head and legs, we see a small marking on its back and what we believe are cerci coming from its rear end. Cerci (singular: cercus) are small paired appendages coming from the rear end of many arthropods. Cerci are often sensory organs, but sometimes serve as copulation organs or pinching weapons. Let’s take a look at the other picture our reader sent: 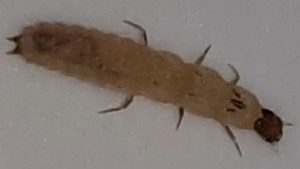 This is a great photograph! We can confirm that this specimen has cerci, a segmented body, 3 pairs of jointed legs, antennae, and 3 small markings on its back. This is a scarlet malachite beetle larva!
Scarlet malachite beetles are widespread throughout North America and the Middle East, and small populations are found in parts of Europe. Scarlet malachite beetles are known as flower beetles. They are found in meadows and gardens where they eat pollen, nectar, and small insects. Scarlet malachite larvae differ in preferred diet and habitat from their parents. The larvae typically live under bark, in old wood, or underground where they feed on small insects, larvae, and slugs.
Neither the adults nor larvae are considered pests, so our reader doesn’t need to worry about finding one of them in his sink. We aren’t sure how it ended up in his house, but if he finds small organisms in his home on a regular basis, there are a few steps things he can do to prevent this. He can check for gaps and cracks between his walls, floors, doors, and windows. He should seal up anything that a creature could crawl through. He should also check to see that his windows and vents are properly screened and that there are no holes in the screens. Finally, he should seal up any cracks or gaps in the foundation of his house. If he is able to get rid of these cracks and gaps around his home, small bugs and worms won’t be as likely to accidentally sneak in!
To conclude, we believe the worm-like organism our reader found is a scarlet malachite beetle larva. This specimen isn’t considered a pest, so our reader doesn’t need to stress about finding it in his house!

Article Name
Worm in Sink is Scarlet Malachite Beetle Larva
Description
We believe the worm-like organism our reader found is a scarlet malachite beetle larva. This specimen isn't considered a pest, so our reader doesn't need to stress about finding it in his house!
Author
Dori Franklin
Comments: 0 Posted by: Worm Researcher Dori Categories: Worms Found in the House