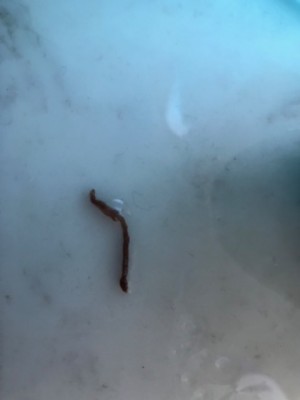 One of our readers recently sent us a photo and this short message, “I found this worm in my shower. Is it a parasite?” The photo shows a brown worm that is a few inches long and has a thin body. The photo is a little dark, so we can’t see too many details of the worm: 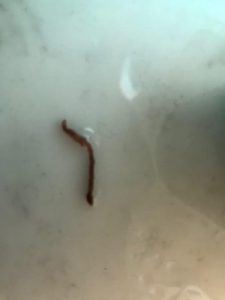 Despite not being able to identify many features of this organism, we have a hunch that we know what it is. We are confident that this is an earthworm, not a parasite. We understand our reader’s worry that this could be a parasite. The slightly rough and uneven edges of the organism are a little odd, but we think this can be attributed the clitellum, which is a raised band made up of reproductive organs. Before we explore why an earthworm might have ended up in our reader’s shower, we want to make it clear that while we don’t think this creature is parasitic or dangerous, we are not medical professionals and are not licensed to give medical advice. Therefore, if our reader is truly worried about his health, we encourage him to visit a doctor!

Now, why is an earthworm in our reader’s shower? While a shower isn’t an ideal environment for an earthworm, earthworms do end up in bathrooms from time to time. Sometimes they are discovered in toilets, and other times they are found in the shower or bath. We think they probably come up through the plumbing system, but we don’t know exactly how or why this happens. As long as our reader only found one of these worms and doesn’t have a colony of earthworms popping up in his house, we don’t think he should stress out about finding the specimen. We recommend he simply place the worm outside, and give his shower a thorough cleaning if he so desires.

To conclude, one of our readers discovered a worm in his shower that he thought might be parasitic. We are confident that the creature is actually an earthworm. Earthworms aren’t considered to be dangerous or harmful, so our reader has nothing to worry about!

Article Name
Worm In Shower Likely An Earthworm, Not A Parasite
Description
One of our readers discovered a worm in his shower that he thought might be parasitic. We are confident that the creature is actually an earthworm. Earthworms aren't considered to be dangerous or harmful, so our reader has nothing to worry about!
Author
Dori Franklin
Share the knowledge