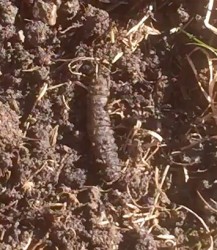 “Worm” in Dirt is a Caterpillar

A couple of days ago we were sent this photo:

The picture was accompanied by the classic question…”What is this?”

A couple of weeks ago we received a photograph that resembles this one very closely, but the specimen was in a slightly different position. We aren’t sure if the reader didn’t see our response and asked again, or if the similarity is just a coincidence. Either way, we are happy to provide some information!

From the photo we can see that the specimen is segmented, brown, and has significant girth. We count about 15 segments, but we could be off by a couple. Also, while this creature looks brown, that might be a result of the dirt it is nesting in. We believe this is a caterpillar!

Unfortunately, we aren’t sure what type of caterpillar this is. There are tons of species of caterpillars, some of which have horns, stripes, tails, or other prominent features. This caterpillar’s lack of flashy features makes it more difficult to identify.

If we had to speculate, we think this is likely a cutworm. Cutworms are the larvae of several species of night-flying moths. They have a similar appearance to the worm in the photo our reader sent.

To sum up, a reader sent us a photo of a brown organism in some dirt. We are confident that this is a caterpillar, but we do not know what type of caterpillar it might be!

Article Name
"Worm" in Dirt is a Caterpillar
Description
A reader sent us a photo of a brown organism in some dirt. We are confident that this is a caterpillar, but we do not know what type of caterpillar it might be!
Author
Dori Franklin
Comments: 0 Posted by: Worm Researcher Dori Categories: Caterpillars