We recently heard from one of our readers in Poland! She discovered a worm in a bicycle bottom bracket at her bicycle shop. She thinks that the specimen is about an inch long. The photograph shows a dark brown worm-like organism. The creature is pretty chubby, and it has a segmented body with one tapered end: 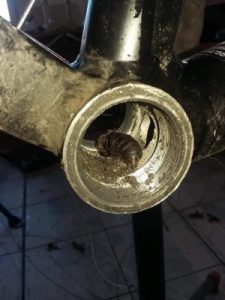 We believe that this is a black soldier fly larva! Black soldier fly larvae, a.k.a. BSFL, are common and widespread creatures. They aren’t considered pests or vector species, which means they generally don’t cause damage, destruction, or bring up any health concerns. They are known for their amazing ability to break down organic materials and return nutrients to the environment. In other words, they rock at decomposition! In fact, they are so good that some people even raise them or purchase them in large quantities to use for composting. They are also commonly used as animal feed. 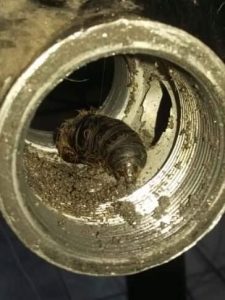 While we are confident about what our reader has found, we aren’t too sure about why it is living in a bike bracket at a bicycle shop. Readers typically find these specimens in their compost piles, trash bins, or alongside rotting meat. We have no clue why this creature would be hanging out in a bike shop since it isn’t a hub for decaying organic matter! We recommend that our reader investigate the trash bin at the shop, as well as the compost and recycling containers if they exist. If she finds more larvae, there is definitely a food source for them present in the shop. It might be something someone has disposed of, which means she will need to empty out the bins ASAP. She can also clean the actual bins, in case there are remains present on the walls of it. Finally, she can do a general cleaning of the entire shop, sweeping, dusting, and vacuuming to get rid of any other small particles laying around.

Our reader only mentioned finding one single larva, so we don’t think she needs to stress out about the discovery…especially since black soldier fly larvae are harmless. We wish her the best of luck with her bicycle shop!