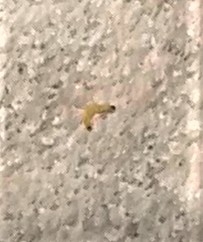 “Can you help me identify this worm found on my puppy’s paw after going outside?” this reader asks of this white, larva-looking critter crawling around on the floor in a video she sent in with her query. Her puppy recently had a tapeworm and so our reader is understandably “freaking out”.

The tapeworm that our reader’s puppy had has been treated, and she says that the tapeworm did not look like this worm. She also states that this worm was not found on her puppy’s “butt” but indeed on his paw. We agree that this worm definitely does not look like a tapeworm. It also does not really resemble a flea larva, which would have been our first guess. In fact, initially we really thought it might be a flea larva. Flea larvae tend to be more transparent than white, but the background can obviously then influence what color they appear to be, but they are also legless until their pupal stage. Only upon zooming in on a screenshot we took from this video did we notice the small forelegs sprouting from one end of this critter’s body. Its forelegs, combined with its white body and dark-colored head, told us that this is a beetle larva.
Video of Grub Crawling On Floor

Otherwise colloquially referred to as grubs, beetle larvae are commonly found outside in the yard, which is where we assume our reader’s puppy might have been when he was outside. It is likely he simply stepped on this grub and brought it with him inside; it is not an uncommon occurrence. Now, there are hundreds of thousands of species of beetles, and many of them have identical larval phases, so we will not be able to tell our reader exactly what species this grub is. Either way, generally speaking, beetle larvae are harmless. They are even safe to eat, both for humans and dogs, but of course, the soil around it is likely not safe to eat, so if our reader notices that her puppy is eating grubs, she should probably keep her puppy away from those areas.

The only thing our reader really needs to do is move the grub back outside where it can feed on decaying vegetation in peace. Unfortunately, unlike earthworms and millipedes, grubs are not actually environmentally beneficial in that they do not produce fertilizer after eating decaying organic materials. That being said, they are not harmful to the environment, so releasing them back into the wild will do no direct harm to any of the flora or fauna.

To conclude, the worm our reader found on her puppy’s paw is actually a beetle larva (grub), though what species exactly, we cannot say. We hope that this article is able to quell her fears and put her mind at ease. Naturally, if our reader does have reasonable cause to believe that her puppy’s health is declining, for whatever reason, we urge her to get in touch with a vet, but otherwise we do not think there is anything to worry about regarding this worm.

Article Name
Worm Found on Puppy's Paw is a Beetle Larva/Grub
Description
"Can you help me identify this worm found on my puppy's paw after going outside?" this reader asks of this white, larva-looking critter crawling around on the floor in a video she sent in with her query. Her puppy recently had a tapeworm and so our reader is understandably "freaking out".
Author
Worm Researcher Anton
Share the knowledge

People helped by this info: 959