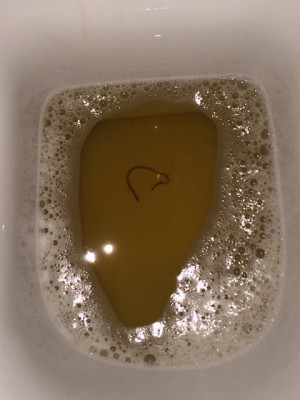 A reader recently reached out to us because he found a worm in his toilet bowl. He said that he noticed the worm moving around in the bowl before flushing, but after using the toilet. He is worried that it might have come from his body. He described the worm as a reddish-brown worm. He wants to know what this worm is and what to do. Here is the picture he sent us: 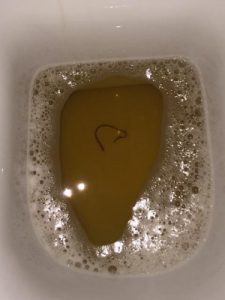 The picture doesn’t show a lot of  detail, so we will have to trust our reader that it is reddish-brown. We can see that it is thin and several inches long. Despite not having a close-up view of this specimen, we have a good idea about what it is. We believe this organism is an earthworm.

While earthworms thrive in the outdoors, they sometimes end up inside a home for various reasons. Sometimes they wander in through an open door or unsealed window. Other times they get dragged in on a shoe, pet, or bag. So, how did this worm end up in the toilet? It might have entered the house in one of the ways mentioned above, and then sought out the toilet because earthworms needs a lot of moisture to survive. (They can actually live submerged in water for several weeks as long as the water has sufficient oxygen to support them!) The earthworm might have also ended up in the toilet through the pipes. This is a much less probable explanation, especially if our reader only discovered one worm. If he continues to find worms in the toilet, he can call a plumber to have a look at the pipes.

To wrap up, one of our readers discovered a reddish-brown worm in his toilet. He was worried that it came from him. While we aren’t medical professionals, we believe that this worm didn’t come from his body, and that it is an earthworm. That being said, if our reader is worried about his health or showing any strange symptoms, we encourage him to seek advice from a medical professional as soon as possible!

Article Name
Worm Found in Toilet is Likely an Earthworm
Description
one of our readers discovered a reddish-brown worm in his toilet. He was worried that it came from him. While we aren't medical professionals, we believe that this worm didn't come from his body, and that it is an earthworm.
Author
Dori Franklin
Share the knowledge

This many people searched for this info: 1,698