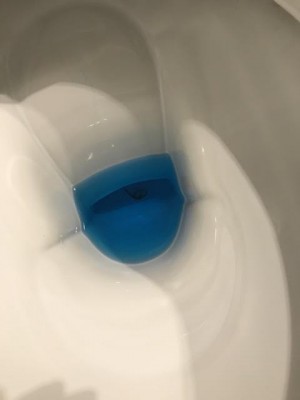 We recently received a photograph and this message from one of our readers: “I am wondering what this little dude could be, I found it in the toilet before using it – could have been sitting there even for a day or two. It was alive and slightly moving. Could it be coming from a human body? Or up from water pipes? Or from something else? Location is Central Europe, although human occupant is and has been a traveler  (Middle East, South America, all over Europe, North Africa). Toilet is located in a 3rd floor flat in a city. Is there any chance that the mystery shouts for a doctor?” 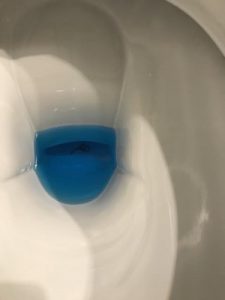 Due to the blue color of the water in the toilet bowl, we can’t see much of the worm. It appears to be small, thin, and black (it might be a different dark color that simply looks black.) We think it might be a couple of inches long, but it is difficult to understand its exact size because it appears to be curled up in the bottom of the bowl. So, what is this creature? Did it come from a human?

We are fairly confident that this creature came from the pipes and not from a human, especially since our reader discovered the worm before he used the toilet. We think this might be an earthworm, since readers discover earthworms in their toilets on a fairly common basis!  Earthworms burrow in moist soil where they have access to dirt, which they eat, and plenty of oxygen. After heavy rain an earthworm might get pushed through a crack in a pipe and end up in a toilet bowl. Not the most likely occurrence, but crazier things have happened! Since our reader only discovered one specimen, be it an earthworm or some other worm-like organism, we recommend he place it outside (if he hasn’t already flushed it) and not worry. That being said, if he is concerned that it came from his body and/or is experiencing any symptoms, we encourage him to see a doctor because we are not medical professionals and cannot give medical advice!

To summarize, a reader found a small worm in the bottom of a toilet bowl. Although we didn’t get a good look at the creature, we think it might be an earthworm because they pop up in readers’ toilets from time to time!

Article Name
Worm Found in Toilet in Central Europe
Description
A reader found a small worm in the bottom of a toilet bowl. Although we didn't get a good look at the creature, we think it might be an earthworm.
Author
Dori Franklin
Comments: 0 Posted by: Worm Researcher Dori Categories: Worms Found in the House