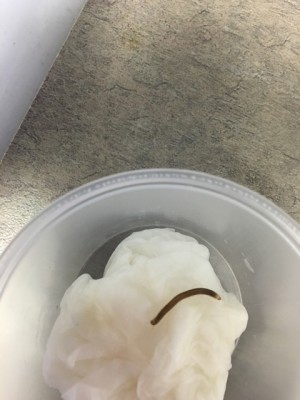 Worm Found in the Toilet Bowl is Probably a Millipede

One of our readers has shared a photo of a dark-colored cylindrical worm with antennae she found in the bathroom. Her concern is largely whether this is an intestinal parasite or could have been in the toilet bowl before it was used by a person. With its cylindrical body shape and antennae, we think it’s not a worm, but an arthropod, alarmingly named the snake millipede and harmless to humans, and was most likely in the bowl before she noticed it. 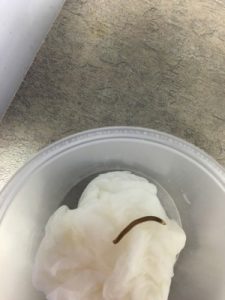 A dark worm with antennae found in a toilet bowl.

The black (or white legged) snake millipede (Tachypodoiulus niger) and blunt-tailed snake millipede (Cylindroiulus punctatus) are among those most common to the UK and parts of Europe. The blunt-tailed snake millipede grows up to 25 millimeters, is typically pale brown with a striped appearance, and often has darker spots along its sides. While it’s not a unique feature, the blunt-tailed snake millipede also has a dark mask across the head, and as in this picture, has a paler tail end. Though it’s difficult to discern stripes or bands on this specimen, the antennae and pale tail end narrow things down. In North America, millipedes are brownish and grow to 2-4 centimeters. The larger North American millipedes (Narceus americanus) tend to have brighter colors.
We wonder if this specimen is deceased, because typically, upon encounter, millipedes coil themselves against predators into a spiral. Despite the alarming name, the snake millipede is not harmful to humans, subsisting largely on dead leaves and other plant litter.

Around homes, millipedes tend to live in flowerbeds and gardens, under mulch and wood where the soil stays damp. After heavy rains, and as the weather gets cooler in the fall, millipedes often leave their normal habitat and climb foundations or into crawl spaces of homes to live under boxes or stacked wood and feed on dead leaves that have blown in or up against buildings. They can be very active in the far corners of unused spaces, and will crawl into homes under doors or from garages and crawl spaces.

The damp of bathrooms and kitchens can be attractive to them as well, and to avoid attracting millipedes into the home, our reader should minimize heavy mulches near the house. Sealing gaps and cracks around doors and windows, and reducing moist places that favor millipede survival outside the home can help prevent those seasonal migrations into the house. If more millipedes are found, vacuuming them up is a common way to remove them in the home.

Article Name
Worm in the Toilet Bowl is Likely a Millipede
Description
One of our readers has shared a photo of a dark-colored cylindrial worm with antennae she found in the bathroom. Her concern is largely whether this is an intestinal parasite.
Author
Rebecca Linnmyer
Comments: 0 Posted by: Previous Author Categories: Gross Worms