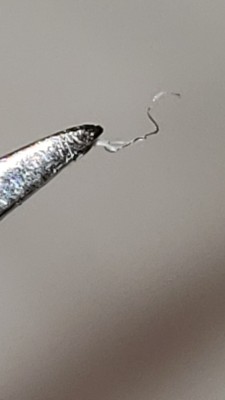 One of our readers reached out to us because she found a worm-like organism in her nose covered in mucus.  She explained that is was moving in a gyrating fashion. She didn’t ask a specific question, but did send us a photo. The specimen is tiny! We believe it is being held by tweezers in the photo. It is thin and looks silver or black: 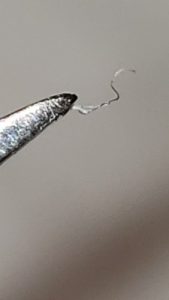 We are not medical professionals and therefore cannot diagnose our readers. Since this seems to be a medical issue, we encourage our reader to see a doctor ASAP. That being said, we have read about worms coming out of peoples’  noses before – roundworms. According to the University of Rochester Medical Center, some people display no symptoms of a roundworm infection, while others experience one or many of these:

• Worms in a bowel movement

• Worms coming out of the nose or mouth

• Weight loss or failure to grow

So, one of the symptoms of being infected with roundworms is worms coming out of the nose. As we mentioned, we cannot diagnose our reader or provide medical advice other than encouraging her to see a doctor! We can, however, provide some information on roundworms.

Though rare in the United States, roundworm is a common parasitic infection worldwide caused by Ascaris lumbricoides. Roundworm eggs live in soil that is contaminated with feces. If someone touches infected soil and then touches their mouth, they can become infected. Roundworms can then live inside the body in the small intestine for up to 2 years. These worms reproduce very quickly, and females might lay more than 200,000 eggs per day, which then pass through bowel movements and have the potential to infect other people.

According to the Center for Disease Control and Prevention, treatment includes taking medication for 1-3 days that rids the body of parasites. The most effective way to prevent roundworm infection is to wash your hands thoroughly and often!

To wrap up, one of our readers reached out about a worm coming out of her nose. We aren’t able to diagnose medical issues, but we have given a brief overview of roundworms, which are parasitic worms that can emerge from their host’s nose. We encourage our reader to visit a doctor ASAP!

Article Name
Worm Emerging From Reader's Nose
Description
One of our readers reached out about a worm coming out of her nose. We aren't able to diagnose medical issues, but we have given a brief overview of roundworms, which are parasitic worms that can emerge from their host's nose. We encourage our reader to visit a doctor ASAP!
Author
Dori Franklin
Comments: 0 Posted by: Worm Researcher Dori Categories: Parasite Worms, Round Worms