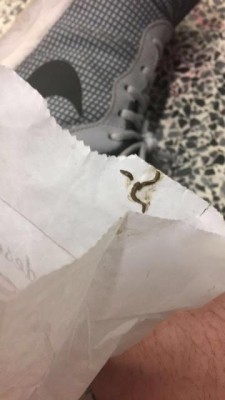 One of our readers reached out to us with a short message. He explained that he bought some donuts (also known as “doughnuts”) at a local donut (or “doughnut”) shop and then discovered a tiny worm on the inside of the bag. The worm freaked him out and now he is worried he may get sick from the donuts. He wasn’t able to figure out what the worm was and was hoping we could help identify it. Here is the first picture he sent us: 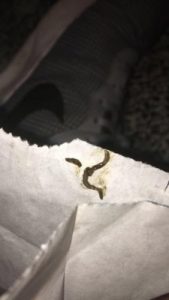 The worm in question is either a brown or green color. It looks like it is a few inches long and has a shiny or slimy body. At first we thought it might have a clitellum, which is a raised band of segments on an earthworm that contains reproductive organs. However, upon closer inspection we think the worm is just folded over on itself in a small area. We are confident that this isn’t an earthworm, and it isn’t small and white like most larvae, so what could it be? 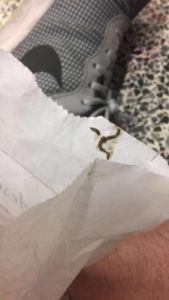 Unfortunately, we aren’t sure about the identity of this specimen. We can confidently rule out many of the creatures that we write about often such as drain fly larvae, carpet beetle larvae, bloodworms, and moth fly larvae. And while crossing off potential specimens from the list is helpful, in this scenario it still doesn’t get us much closer to being able to identify this organism. We could go on and on listing potential worms, but they would all be guesses and not based on the information we have, and therefore not very useful to our reader. We really appreciate the pictures our reader sent and the information he provided, but we are sadly unable to name this creature.

All in all, a reader sent us a few photographs of a worm he found in a bag of donuts. We aren’t sure what the specimen is, but we are confident that it isn’t parasitic. While we can’t express an opinion as to whether we think our reader is likely to get sick from eating the donuts that were in the same bag as the worm, because we are not medical professionals, we can suggest that if he does feel ill or is worried about his health then we encourage him to see a doctor!

Article Name
Worm Discovered Inside Donut Bag
Description
A reader sent us a few photographs of a worm he found in a bag of donuts. We aren't sure what the specimen is, but we are confident that it isn't parasitic.
Author
Dori Franklin
Comments: 0 Posted by: Worm Researcher Dori Categories: Earthworms, Worms Found in the House