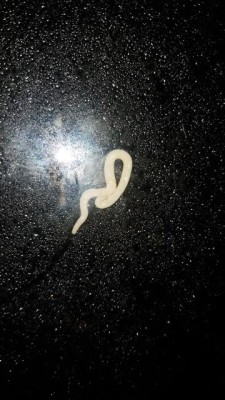 A reader recently reached out to us from Central Florida and wrote us a message. He discovered a worm-like organism crawling up his sliding glass door, and would like us to identify it if possible. From the photograph, we can see that the creature is long, thin, and has a cream-colored underside. This is the picture our reader sent: 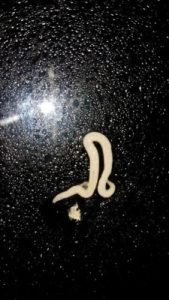 What could this critter be? We don’t immediately recognize what sort of specimen could be crawling up the sliding glass door. Therefore, we will start with the process of elimination. We believe that it is not some sort of larvae. Larvae are often much smaller than the creature in the photograph. So if it isn’t larvae, is it a worm? We aren’t sure. We think this creature could be a worm, or perhaps a small snake.

Worms and snakes don’t typically climb or crawl up glass. However, we can see that there is water on the glass door as well (perhaps from a recent rainstorm?) This moisture might act as an adhesive, and allow the creature to crawl up the glass. We have heard of earthworms crawling up glass before, but this specimen doesn’t resemble an earthworm. Earthworms are usually brown or red, and have thinner segmented bodies than the critter our reader found. We simply don’t know enough about the appearance or manner of this worm-like organism to be able to identify it.

In conclusion, a reader from Florida found a worm-like organism crawling up his sliding glass door. We were unable to recognize the specimen in question. We think it is probably a worm or a small snake. If any of our readers have dealt with similar situations of creatures crawling up glass, or have ideas of what this organism is, we invite them to share their experiences in the comment section below!