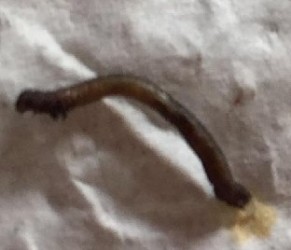 A reader sent us a question the other day about a worm, or what “seems to be a worm,” that was found on her mother’s head. The reader went through quite a bit of trouble to figure out what she found, researching online and consulting her notes from a zoology class, but she couldn’t figure out what was on her mom’s head. She therefore wrote to us, hoping that we might be able to help with the matter of identification.

Fortunately, the reader sent a picture along with her question:

We can’t be certain, but this looks like an inchworm. The creature appears to have small legs on the front end of its body, and the back end of its body appears to be latching onto the surface in one way or another, presumably with some sort of leg-like appendages. The middle of the creature, which seems to be slightly elevated from the surface, has no legs at all. If we are perceiving everything in the image correctly, then this creature has the body features of an inchworm, which have three pairs of thoracic legs on the front end of their bodies and two or three pairs of prolegs on their back end. The distribution of the inchworm’s legs and prolegs is responsible for the creature’s characteristic locomotion. The rear prolegs are able to plant on the ground, allowing the inchworm to extend forward and secure its front legs to the ground. Once the front legs have taken hold, the back end of the creature is pulled forward, allowing the prolegs to once again plant themselves on the ground. In this way, inchworms “inch” along the ground, and hence their name.

However, their everyday name is only partially fitting, as inchworms aren’t actually worms, but rather caterpillars. More specifically, they are the larval form of geometer moths, of which there are around 35,000 known species. The fact that inchworm aren’t actually worms might explain why our reader had difficulty finding information about them in her zoology notes. They would fall under the insect category, not the worm category (although there really is no such thing as a “worm category” since “worm” refers to an obsolete taxon).

We’ll conclude by noting that it is incidental that the inchworm was found on the reader’s mom’s head. Some species of inchworm will hang on silk threads, so perhaps one got tangled up in her mom’s hair as she was walking outside under a tree where inchworms were feeding. In other words, an inchworm wouldn’t purposely seek out a person’s head – it could only end up there by accident.

Article Name
Worm Crawling on Head
Description
A reader sent us a question the other day about a worm, or what "seems to be a worm," that was found on her mother's head.
Author
All About Worms
Share the knowledge

This many people searched for this info: 1,573