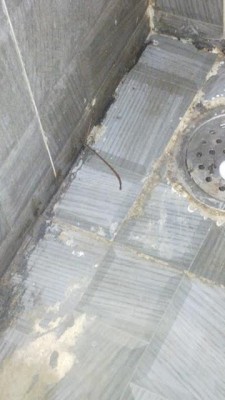 Worm Crawling in Bathroom Could be Earthworm

October 12, 2017
We recently heard from a reader in distress. She wrote that there are, “worms crawling in my bathroom from past 10 days. I am very scared of them.” She wants to know what these worms are and how she can get rid of them. The photograph she shared with us shows a long, thin, brown worm-like organism near what we believe is a shower drain. 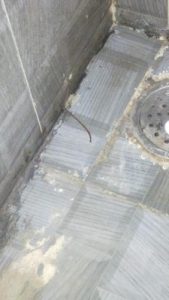 We can’t determine much about this organism from the photograph. We can see that it is several inches long and a brown color. However, we don’t know any other details about the worm. Is it segmented? Is it lustrous? Does it have any markings? Does it have antennae? Based on the little information we do have, we think it could be an earthworm.

Earthworms are commonly discovered in the bathrooms of readers! Their size ranges from smaller than 1 inch to up to 14 inches long! Earthworms also vary in color. They might be shades of brown, red, grey, pink, and purple! They need moisture to survive, so perhaps the environment in our reader’s bathroom is appealing to earthworms. While earthworms are a good guess as to what our reader has found, we aren’t convinced that she is dealing with earthworms based off of the photograph alone. We need more information to make a definite identification.

No matter if our reader found earthworms, or some other worm-like organism, we recommend she give her bathroom a thorough cleaning in an attempt to eliminate whatever is attracting these worms in the first place. Most worms feed on decaying organic material, so she should pay particularly close attention to the drains in her shower, sink, and toilet. In addition to cleaning, she can eliminate humidity and moisture (which most worms also like) by installing a dehumidifier.

In summary, a reader reached out to us because she discovered long, brown worms crawling around her bathroom. We think these might be earthworms!

Article Name
Worm Crawling in Bathroom Could be Earthworm
Description
A reader reached out to us because she discovered long, brown worms crawling around her bathroom. We think these might be earthworms!
Author
Dori Franklin
Comments: 0 Posted by: Worm Researcher Dori Categories: Earthworms