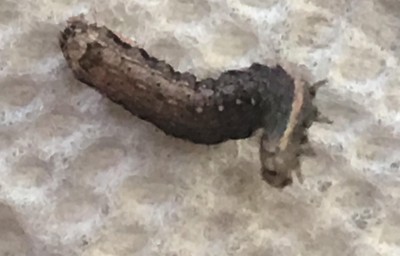 A reader recently sent in this image of a black worm-like creature he caught eating dahlia leaves. He asks that we identify the creature, which is 1cm (0.39-inches) in length, black and gray in color, and with a white stripe down the middle of its underside. 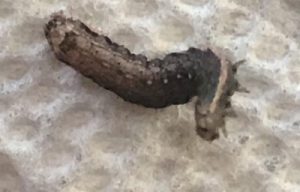 We wish to thank our reader for sending in such an excellent photo, which shows the creature rearing up on legs at the front of its body, where we can see the aforementioned white stripe and the legs underneath its body. In addition to this, we can see the mottled black and gray pattern of colors along the creature’s body. The worm appears to be some kind of caterpillar. As there are a plethora of different species, it is difficult to tell exactly which species. Caterpillars are the larval stage of butterflies or moths, and are frequently found in forests and in people’s gardens.

A caterpillar’s primary purpose is to eat. Before going into its pupal stage, where it builds its cocoon to undergo metamorphosis, a caterpillar needs to accumulate as much energy as possible to sustain itself during the process of metamorphosis. In fact, caterpillars eat such a tremendous amount in their time as larvae that they increase their mass by 1000 times more than their original amount, according to ThoughtCo. If a caterpillar does not ingest as much food as it needs to, it may still reach adulthood (the butterfly or moth stage) but be unable to ovulate (in the case of the female).

Unfortunately, caterpillars are considered pests once they start feeding on one’s plants and crops. Since they eat so much, they have the potential to kill off significant amounts of vegetation. For this reason, our reader might want to ensure the protection of his plants from these creatures. If he wishes to combat a possible caterpillar infestation, we recommend that our reader applies methods that do not require the use of pesticides.

One method is the manual removal of the insect and their eggs. Butterflies and moths tend to lay their eggs on the underside of leaves, so if one were to frequently check the underside of one’s plants and remove the caterpillars, as well as the eggs, that one finds, one can significantly reduce the risk of a caterpillar infestation, or at the very least prevent one before it happens. Make sure to be careful when removing a caterpillar, for certain species can be venomous! We would recommend wearing thick gardening gloves when handling caterpillars.

Additionally, another method is to use insect barrier fabrics. These are put up around the areas one wishes to protect, as exhibited in the image below. However, there is a simpler ‘do-it-yourself’ version that requires only the fabric, bamboo poles, and plant pots! This method is outlined by SFGate if our reader is interested in applying this alternate version of the insect barrier fabric method.

In conclusion, the creature that our reader found eating dahlia leaves is a caterpillar. Caterpillars are pests, as they feed on vegetation, but are usually harmless toward humans. However, they should be handled with care if manually removed and respected as the sentient creatures they are.

Article Name
Worm Caught Eating Dahlia Leaves is a Caterpillar
Description
A reader recently sent in this image of a black worm-like creature he caught eating dahlia leaves. He asks that we identify the creature, which is 1cm (0.39-inches) in length, black and gray in color, and with a white stripe down the middle of its underside.
Author
Worm Researcher Anton
Comments: 0 Posted by: Worm Researcher Anton Categories: Caterpillars, Garden Worms, Pest Worms