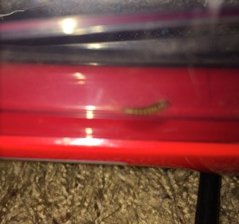 Wireworms or Carpet Beetle Larvae in the House

A reader wrote to us a couple of days ago about some brown worms that she vacuumed off of her carpet. (Actually, it isn’t clear if the brown worms were on the carpet, but the picture she sent us shows the vacuum on carpet, and that’s why we make this assumption, which may be is relevant.) Unfortunately, we weren’t given any information about creature, but, as mentioned, we were sent a photo, and this photo may depict a wireworm (sometimes spelled as “wire worm”). However, she might have also found a carpet beetle larvae, so we detail both possibilities below.

The creature is actually in the case of the vacuum, which is why it is somewhat hard to see, but it can at least be clearly made out.

Based on the appearance alone, this looks a lot like a wireworm, which is the larval form of the click beetle. (As larvae, they actually aren’t worms, despite their name.) There are nearly 10,000 known species of click beetle in the world, and thus there are lots of different kinds of wireworms, but they look similar, with elongated, segmented bodies that are a brown or tannish color. Most wireworms are saprotrophs, which means they feed on dead organic matter, and it is conceivable that some of this is laying around the house (like in the form of food crumbs in the carpet, for instance). Click beetles are not usually household pests, but they of course turn up in houses from time to time, and thus so do their not-yet-fully mature offspring.

We hate to answer so many reader questions with “carpet beetle larvae” because it seems like we aren’t even trying anymore – just a few days ago we identified a larva on a cat’s blanket as a carpet beetle larva – but we are asked about these creatures constantly. And if we had to pick between carpet beetle larvae and wireworms in this case, we would probably go with carpet beetle leave because of their prevalence. Both suggestions are definite possibilities, though, so we encourage our reader to look into both types of larvae to learn about removal and prevention measures she can take. She can start with our article about getting rid of “worms” on the carpet.

Article Name
Wireworms or Carpet Beetle Larvae in the House
Description
A reader wrote to us a couple of days ago about some brown worms that she vacuumed off of her carpet.
Author
All About Worms
Comments: 0 Posted by: Worm Researcher Evan Categories: Pest Worms